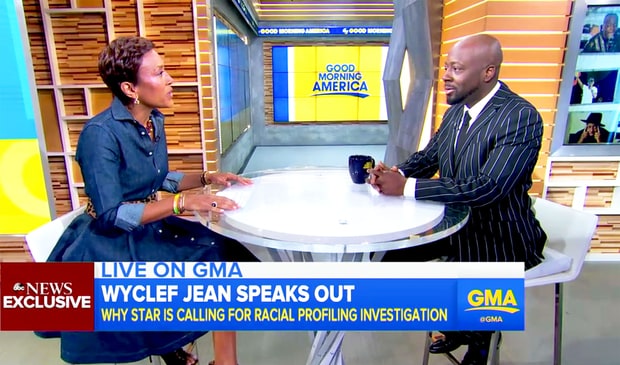 Wyclef Jean Talks About Terrifying Incident With Police, Claims He Was “Scared For His Life” After Being Mistaken For Robbery Suspect (VIDEO)

Yesterday we told you about the scary incident Wyclef Jean had with police early Tuesday morning. The singer/rapper was coming home from the studio at around one in the morning when he was pulled over by the police at a gas station.

They pulled out their guns and told him to put his hands behind his back. This whole time he was trying to tell them who he was and explain they had the wrong guy, but they refused to listen. They treated him like a criminal.

Thankfully, they eventually cleared everything up and the real suspect was found a few blocks away from where the incident with Jean took place.

Jean sat down for an interview with ABC’s Robin Roberts to discuss the madness. He admits he was scared for his life, “I have to tell you, I was scared for my life to the point where I could have acted different and if I had, something different could have happened.”

“I’m automatically rushed. When I’m rushed, guns are drawn, which is the part you don’t see … I’m pulled over. I say, ‘Well, my name is Wyclef Jean.’ Then I’m taken and put in handcuffs in the back. The point I want to make and the racial profiling is that basically I feel like I was targeted as a black man. It is clear and was obvious because when I was getting out of the car and the way that the cops rushed me, the conversation that I was having with them, it was a silent and a death conversation.”

He adds that all the cops had to do was Google his name and look up a photo of him. He’s asking for a formal investigation into racial profiling to hopefully prevent this from happening to another black man.