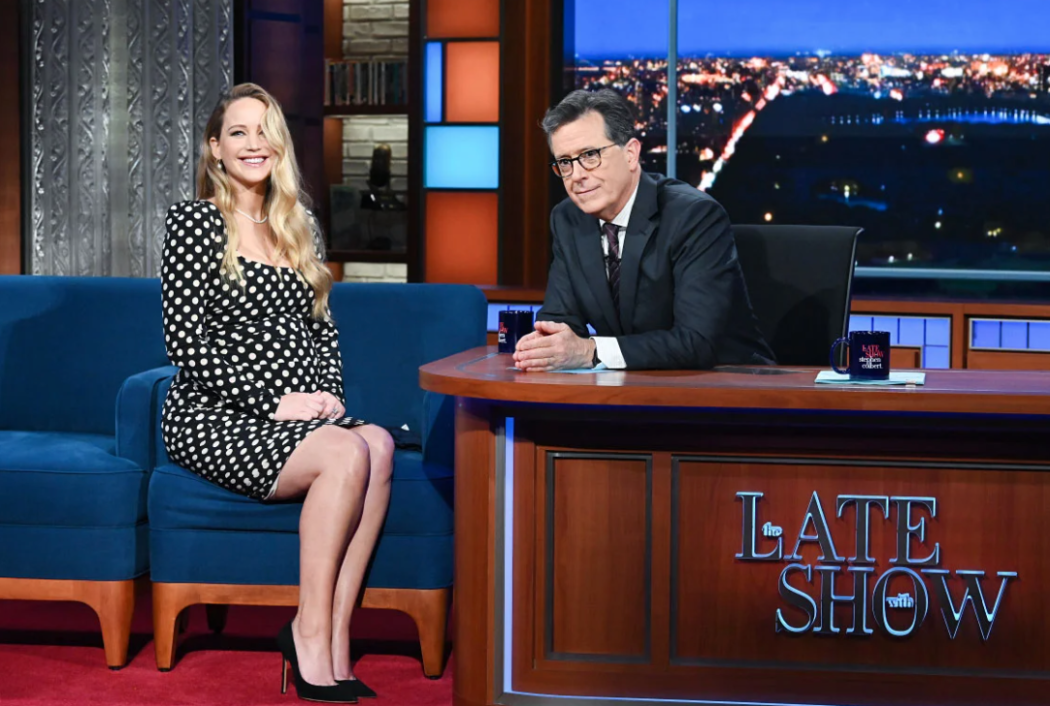 ‘Don’t Look Up‘ will be Jennifer Lawrence’s first feature film since 2018. The 31-year-old actress shocked the world a few years back when she announced she’d be taking a two-year break from Hollywood.

After filming ‘Red Sparrow‘ Lawrence felt sick of seeing herself everywhere. She also believed people were getting sick of her, so she felt like a break from the spotlight was needed.

And unlike most celebs who promise a hiatus, Lawrence actually kept her promise. She said goodbye to Hollywood for two years.

What did she do during the time away? Well, during a recent appearance on the Late Show with Stephen Colbert, Lawrence joked she had a lot of sex. She made the joke because she’s currently very pregnant. She and her husband Cooke Maroney are expecting their first child together. They got married back in 2019 in a small ceremony in Rhode Island.

After she made her sex joke, Lawrence gave a serious answer about her time away.

I cooked a little. The pandemic happened, and then I cooked and I cleaned a lot. … I think I would be a really good housekeeper. No, I really do. I make a mess, but I’m really good at cleaning it up. I can attack a mess. It was really nice. I’ve always found comfort in a schedule and doing something and being somewhere and just the comfort of being on set where the world is one thing and very organized. There are not people screaming. Coming out of Hunger Games, it was nice [to take] a break.

During an interview with Heather McMahan on the ‘Absolutely Not‘ podcast, the actress talked about how easy it is to lose yourself in Hollywood.

That’s one of the reasons she needed a break…

It’s like the next big movie, do this, do this, do this. And you’re like, ‘Oh ,my God. Great, great. What a, what an amazing opportunity.’ And you’re just a part of this machine. And then you’re like, ‘Wait a minute. I’ve lost track of the kind of films that I want to make and why I want to make them.’ I felt like my career had taken on a life of its own. … I just had to make some changes and I did.

Sounds like she knows exactly what she wants these days. Good for her. I think she’s going to make an outstanding mom.