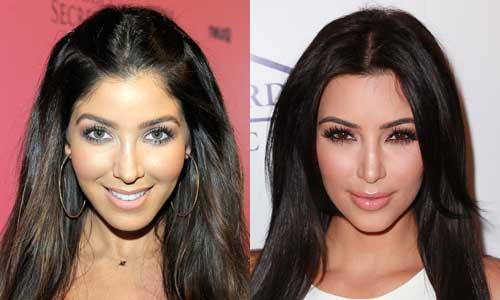 We reported a few months ago that Molinaro was the Kim Kardashian look alike in that old Navy ad that was in heavy rotation.  Well that picture above shows just how much she looks like Kim.  DAYYYUUMMMM!!!
But Kim is fighting back. Enough is enough. First her look, now her ex boyfriend. Kim is suing Old Navy for big bucks. The sum is rumored to be about $30 million.
I wonder if Kim’s mom had anything to do with the law suit. She is the brains behind the Kardashian brand as we see on the show quite often. (Of course I watch it!  I run a gossip blog).
The law suit is basically for

‘the unauthorized use of Kardashian’s name, likeness, identity, and persona.’

A statement from Kim’s representation reads:

‘Old Navy launched a multimedia advertising campaign featuring television and online ads that misappropriate Kardashian’s likeness in the form of a celebrity look-alike, and styled the infringing ads to evoke Kardashian’s identity and persona.’
‘Kim Kardashian is immediately recognizable, and is known for her look and style. Her identity and persona are valuable. When her intellectual property rights are violated, she intends to enforce them,’

Usually I wouldn’t think that the lawsuit would hold up, but then I found out that Old Navy poured on a little extra with the twitter campaigns, a media outlet that Kim is the reigning champ of.
Here is an example of one of Old Navy’s tweets

‘@CBSNEWS reports that Old Navy’s Super CUTE star looks like @kimkardashian. #LOL. What do you think?’ reads one the tweets.

Molinaro is trying to capitalize on her 15 minutes of fame. She came close as a member of the Pussy cat dolls on the show “Pussycat Dolls Presents: The Search for the Next Doll” and she just missed the cut for “Making the Band”.  She thought she had finally arrived when she recieved the starring role in Honey  Part 2, but it went straight to DVD.

Now she has seized the moment and is working on her album just releasing her single “Dance Floor”. She’s no dummy and is making the best out of this situation.  Mellissa is actually living the good life.  Free publicity, she’s not getting sued, and she’s dating Reggie Bush, what more could a girl ask for. Plus……I’ll say this because I’m confident in my manhood…….. If I was a chick I would take Bush over Humphries any day.

Ok the video is crap, the song is garbage, but Molinaro is Hot. I guess Reggie knows what he likes!