Rihanna Gets Booted by a Farmer for being Too Sexy and a Twitter Fan Calls her Fat. WTF!! 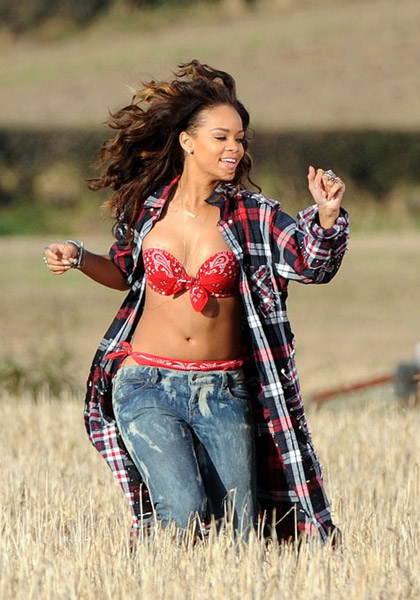 You can call Rihanna a lot of things but FAT would be one of the last.

Leave it to twitter!  When the photos that we posted yesterday hit the internet a fan tweeted directly to Rihanna calling her fat!

“@rihanna looks fat in the we found love pics =[,”

The tweeter is identified as LimmitedEdition and his name is Trey Suede Raymond.  (Umm….yeah)

Rihanna, who is no stranger to criticism laughs it off, and then…..AGREES!!!  YIKES!!  She tweets back,

“I peeped that too *puts down donut*.”

It’s all about self-image.  Maybe her pants were a little tight, that morning, or maybe she gained 3 lbs since last month.  I know how women are, but for someone else to say she’s fat is ridic.  Kudos to Trey Suede Raymond cause even I just wrote about him…..his twitter swag is now on full tilt.

While the Twitter twerps were chirping, a farmer got his Overalls in a bunch over the video shoot he agreed to let them film on his grain farm.

When the filming of the video begins, Rihanna is wearing a handkerchief bikini and some photos look to be topless.  The grain farmer came rolling up on his tractor and re-tracted (sorry for the bad pun) his permission to shoot on his farm.

The 61 year old, Alan Grahm told BBC why he objected,

I have an ethos and I felt it was inappropriate, I requested them to stop and they did.”

“I didn’t know who was coming. If the name ‘Rihanna’ had been mentioned, well, no disrespect but it wouldn’t have meant anything,”

I wish no ill will against Rihanna and her friends. Perhaps they could acquaint themselves with a greater God,”

SERIOUSLY? Someone needs to get a life, or pull the thumb out of his Irish a** and start living the life that he  has.

Oh well, two nobodies, getting their 5 minutes of fame, and I’m sure Rihanna won’t think twice about any of it.  Maybe she won’t even think once. Video of the filming with the farmers commentary below.