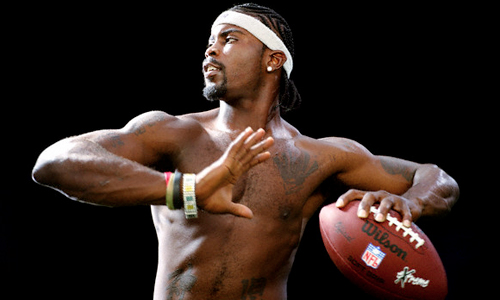 Vick is in the news again, and it’s not for football.  There is a woman who says she has a photo of Mike Vick in his birthday suit.  Twig and Berries Exposed.  She is shopping them around trying to get a price for the flicks.

Neither Vick nor his fiancé has yet to deny the existence of the photos, but instead his rep. Rick French spoke to Radar Online,

‘The only thing Mike has on his mind is his date with the Chicago Bears this evening, The rest of what this woman is claiming isn’t worth dignifying.’

Somehow the woman got her hands on photos that Vick took of himself while he was in a hotel bathroom in Dallas. The shots are alleged to be headless, but Vick is identifiable by his tattoos.

Good Luck shopping those around.  There is no story; no scandal, so there will be little to no monetary value.  Not to say a gossip site wouldn’t be interested for the traffic, but posting pics for free and paying for them are two entirely different things. Mike who is engaged to the mother of his two children, Kjafa Frink, will earn a reported $16.057 million dollars this year.

Hey Vick got off easy, at least she’s not claiming Vick had sex with her in the bathroom – Bieber style!!