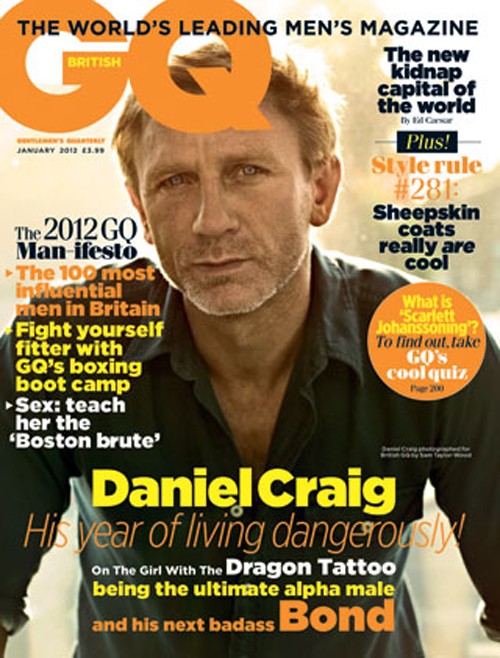 Daniel Craig Goes off on the Kardashians, Tell em Why You Mad Son!

Three Kardashian stories in a row!!  That’s why I have no hate for them what so ever.  Between Kim Kardashian, Mel Gibson and Lindsay Lohan this site is what it is today.  They built my site one story at a time.

However, everyone doesn’t feel as good about the Kardashian’s as I do.  Especially the man we call Bond.  James Bond.  Or Daniel Craig.  He graces the cover of British GQ as he promotes his version of the film “The Girl With the Dragon Tattoo”.

At first I thought his comments were taken out of context….NOPE.

When asked about his marriage to Rachel Weisz and how it was kept private he responded,

“I think there’s a lot to be said for keeping your own counsel, You can’t buy your privacy back. ‘Ooh, I want to be alone… We’ve been in your living room. We were at your birth. You filmed it for us and showed us the placenta, and now you want some privacy?”

Then he got crazy….dropping F-bombs and calling out the Kardashians..

“Look at the Kardashians, they’re worth millions.  Millions!  I don’t think they were that badly off to begin with, but now look at them. You see that and you think, “What, you mean all I have to do is behave like a f*cking idiot on television and the you’ll pay me millions?”  You can’t buy it back you can’t buy your privacy”

TELL EM WHY YOU MAD SON!

Even till this day he remains tight lipped about his marriage, and explains why,

‘Because we didn’t want it f*****d up, because that would be sharing a secret. And the whole point is that it was a secret. A secret is a secret in my mind.’

‘Look, I’m in love. I’m very happy. And that is as far as I’m prepared to go. Life is long, life goes wrong and I don’t want to say something now that might be thrown back later.’

Daniel sounds like a crotchety old bastard if you ask me.  When asked about his career and if he was happy he replied,

‘I’m always trying to figure it out, and I’m kind of unsatisfied constantly. I always want to get it right and I don’t know what the answer to it is.

‘But I do know that it’s out there and I do know it’s worth looking for.’

So I don’t know if he’s philosophical or angry;  bitter or extremely bright.  It’s hard to tell from the words without seeing body movements and hearing inflection.  I’m a Daniel Craig fan but I think his comments regarding the Kardashians are off the mark a little.  It appear he is mixing Kim K up with Snooki, the Kardashian Clan with the Jersey Shore.