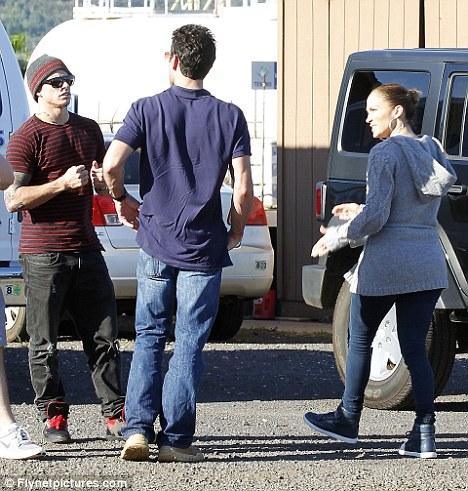 I was all for J-Lo getting her groove back, but the whole trip to Hawaii and bringing this dude around the kids.  Not cool.  I see this turning to be real ugly…just like that outfit she’s wearing.

What’s up with the pants, I thought maybe it was the camera angle but she is looking like a pear shaped soccer mom in skinny jeans, not the chick who was just rocking a skin tight, sequined body suit.

J-Lo is due to perform at a mall opening in Morocco so it’s only normal that she flys in with her back up dancers.  However, Casper Smart flew in with her on a private jet out of Van Nuys.

They say when the women leaves a marriage she was really done years ago, that’s why they can move on so quick, but this is crazy.

Oh by the way – Casper’s real name is Beau Paul Smart.  You do a little digging and you will see that Mr. Beau Paul Smart has a number of traffic violations due mainly to street racing.  In fact, he’s actually out on bail right now. You wonder how young this dude really is.  The caption under this picture read,

Workin on my street bike.. Bout to cut pipe to make it even louder…

His traffic charges include:

He’s posted $26,000 in bail and is supposed to do community service before his court hearing.  Maybe taking care of the elderly counts.  OHHH!