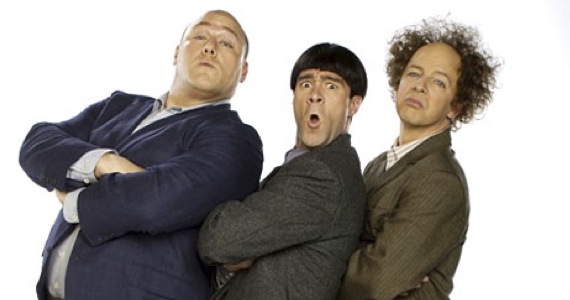 Ok, let me preface that statement.  It’s not hilarious but when you watch the trailer, it’s pretty funny in a slapstick comedy sort of way.  This project has been in the works for years and it’s finally come to fruition.  There were rumors that Jim Carey would be playing one of the Stooges but the cast is without a huge star which means that the movie must have had a modest budget.

MOE – Played by Chris Diamantopoulos (who?)

The premise of the movie is like the Blue’s Brothers meet the 3 Stooges.  The three guys work to save their orphanage, complete with Nuns (including a hot nun in a bikini – see trailer), TV stars and Reality TV Stars.  The list of celebrity appearances is long: Sofia Vergara, Larry David, Jane Lynch, Jennifer Hudson and most of the cast of the Jersey Shore.

Why this will not make cinematic history it appears to be a silly time at the movies.  It hits theaters on April 13th – I will let you guys know on the 14th.