“24” The Movie Will Happen, Scheduled to Start Filming in April with Sutherland. 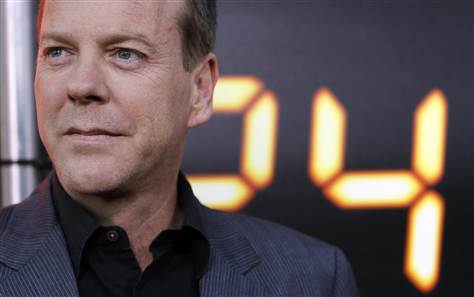 A 24 Movie?  I thought this went the way of “The Sopranos” movie.

Now one year later it appears that a script is complete and shooting will actually begin next year.

When 24 was being televised, the idea of a movie was all the buzz.  It was held off because producing a great television show became top priority.  Then when the show ended they tied up most of the loose ends with Season 8 and a movie was not needed, so again the thought of a movie was just pie in the sky.  When the movie idea resurfaced early this year a script by Bill Ray came forward but was rejected by Fox and the idea slowed again.

When turning a television show into a movie the script is everything. If you recall when Mark Wahlberg was asked about an “Entourage” movie, he said “if they had a good script”.  In 24’s instance, they have to take 8 years and nearly 200 episodes and squeeze it into 2.5 hours that’s going to mean something to the fans.

Sutherland has stayed positive about the entire project and it’s proving to be energy directed in the right place.  There are five directors on the short list and Brian Grazer, who is producing this year’s Academy Awards, is firmly on board as the producer.

Shooting is scheduled to start in April in efforts to work around Sutherland’s work schedule.

For those interested, Sutherland said that the show will not be in real time but 24 hours condensed into a 2 -3 hour movie.  Hopefully they will have Carlos Bernard in the movie, perhaps they can revisit the Drazen mission an pull back some of the best characters ever.

Time will tell and I am on this story, Stay Tuned