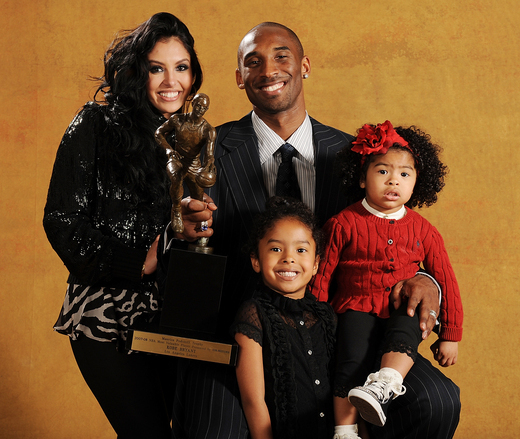 I hope this doesn’t take a Tiger Woods type turn.  Kobe can’t afford a two year slump, and with no Lamar Odom, Kobe is going to have to be great to get that last ring he so desires.

Basically Vanessa Bryant thinks that Kobe is cheating again, and a wife usually knows these things.  The 4 million dollar ring kept her back in 2003 but she has filed papers today citing “irreconcilable differences.”

“She’s been dealing with these incidents for a long time and has been a faithful wife, but she’s finally had enough, This one is the straw that broke the camel’s back.”

This is going to be really expensive for Kobe for 5 reasons:

Vanessa Bryant is asking for joint custody, however she wants the kids living with her because she is asking Kobe to get visitation rights. Because there is no Pre-nup she gets half and has also requested spousal support which Kobe has agreed to in his official response.

The Bryants released a joint statement …

“We ask that in the interest of our young children and in light of the upcoming holiday season, the public respect our privacy during this most difficult time.

Yeah sure – the biggest name in the NBA gets a divorce and we are going to leave him alone.  OK! HOW MUCH IS KOBE BRYANT WORTH?

Darren Rovell on twitter estimated Kobe’s net worth at 360 million.  According to Forbes at age 32, Kobe’s NBA salary is 24.8 million annually which is 4 million more then anyone in the NBA.  This does not include endorsement deals.

Let’s hope that he can keep his head in the game.  This is going to be one to watch!