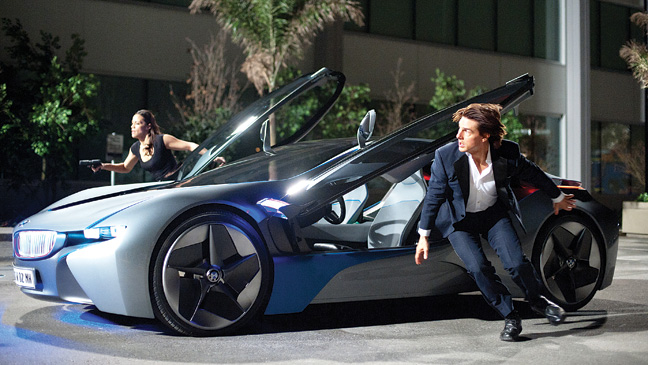 I have to admit that I’m going into this review as a “Mission Impossible” franchise fan and an overall Tom Cruise fan.  After watching the trailer, I was more hyped than ever.  Not only wasn’t I disappointed but the movie exceeded even my already lofty expectations.

Believe it or not, this franchise has been running for 15 years.  I was turned off and let down by the John Woo directed MI: II, remember the end action scene with them dueling it out on Motorcycles.  (Really?).  Then with MI: III,  J.J. Abrams takes the helm and never looks back.  Abrams with the help of Brad Bird as director out did himself.  Yes, that Brad Bird.  Animation director Brad Bird!

Tom Cruise is in rare form. You would never guess he is nearly 50 years old.  He will make you look at your parents and wonder why their 50 looks 60 and his looks 35.  He resumes the role as Ethan Hawk without missing a beat.  On the surface, the complexity of the role is severely underestimated.  Imagine combining Bourne and Bond?  Cruise handles the role almost effortlessly and immediately re-establishes credibility to the role.  Cruise is in top shape (with one shirtless scene) although there is one series of shots where he appears chunky in these off white/gray color pants.  That might be the first that he actually appears his true height in a film.

Jermey Renner plays another agent whose past is connected to Ethan’s and does a nice job of tying the story together.  He reminds me of Jason Bateman and definitely does his part in playing a believable agent.  There have been rumors that his character will take over the series, but at age 49 and with the evident success of MI:4, there is no reason Cruise doesn’t have at least one more Mission in him. Paula Patton is just ridiculously good in this movie in so many ways.  Again, she is super believable and visually striking.  She wasn’t just thrown in for T&A she actually had a huge role in the film.  She had critical parts in all the tasks of the Mission including seducing one of the many villains during a really formal ball.  With her many outfit changes, raw aggression, made for movie face and pure athleticism she was a major reason why this film was as good as it appeared. I will go as far as to say, I haven’t seen anyone as striking on film since Halle Berry.

Rounding out the IMF team was Simon Pegg who sort of took Ving Rhames previous role.  (The Vinger made a cameo at the end).  Pegg was basically comedic relief, walking a thin line between humorous and slapstick.  In my opinion he starts off being almost too silly but as the mission tasks intensify and the stakes increase there is less need for frivolity and his humor becomes a much needed tension reliever.

Don’t short change yourself by not watching this in IMAX.  The action sequences, fight scenes and special effects cannot be appreciated any other way.  I guarantee that this movie will have your heart racing at least once if not more throughout.   The movie length is 2 hrs and 12 minutes.  Perfect.  It feels like a little less than 2 hours which is exactly what a great movie should feel like; as if you do not want it to end. .  So take your expectations and expect more….bigger, better and faster without being over the top (see…Fast Five for ref. to Over the top action).

This movie is well worth the IMAX Premium – GO SEE IT.