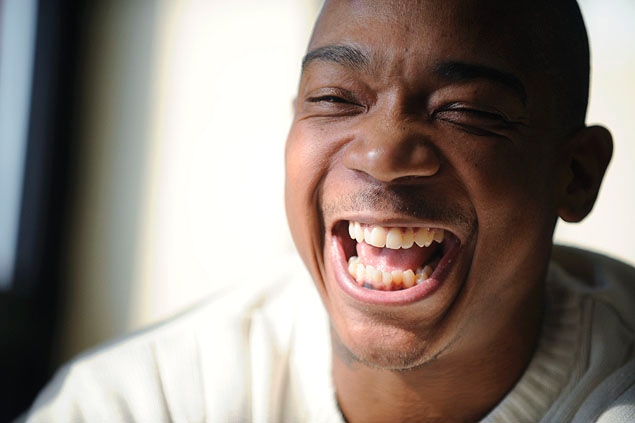 Ja Rule is In Prison Having a Great Time – Hanging Out with Dennis Kozlowski and Ballin’ with Hank Morris.

Ain’t that a bitch.  Ja Rule has been in prison now for a minute, since last July.  I almost forgot he was there, especially because he literally disappeared from the charts years before entering on tax evasion and gun possession charges.

When I heard he gave the Daily News an interview with video footage, I expected to see the DMX style pink jumpsuit, head full of patchy hair and a lot of anger.  Instead you get a clean shaven happy Ja Rule, or should I say Jeffry Atkins.  No jail jumper, he is wearing a Carlton Banks sweater that looks like it’s fresh from the dry cleaners. Really?

Wait a minute.  I thought Jail was supposed to be tough.  I thought you should be fearing for your life every day, scared of your cell mate, and at only 5ft 6 inches, scared to drop the soap.  Instead he is hanging out with mulch-millionaires where they play cards, basketball and watch the Daily Show with Jon Stewart at night.

This facility doesn’t sound tough at all.  In fact it sounds like a freakin’ summer camp for adults.  It sounds like it might actually be, dare I say ….fun!!!

During his interview with the Daily News, he actually goes as far as calling prison “amazing”.  WTF???

“Outside, you don’t meet guys like this every day. This place is amazing,”

The rapper has taken this time to finally get his GED but even more incredible, he is networking with other rich inmates!!!  When they say it’s a country club, they are not bulls#$ttin it is exactly like a country club.  In jail he’s made friends with Dennis Kozlowski and playing ball with Hank Morris.  “Koz has become like a mentor to Ja-Rule. He was the  CEO of Tyco who paid himself $81 Million in Tyco money, and went wild.  He had a $30 Million dollar apartment in NY, and property across the states. He once threw a million dollar party for his ex-wife with stock investor’s money disguising it as a corporate event. This dude is smart, rich and a good person to know.  To date, his innocence is still being argued, he made he statement in an interview with 60 minutes,

“I was a guy sitting in a courtroom making $100 million a year [a]nd I think a juror sitting there just would have to say, ‘All that money? He must have done something wrong.’ I think it’s as simple as that.”

That’s a good person to know. When he gets out, he will be back on top again.  Ja is gettin’ stock tips from “KOZ”, Dennis told him to buy airline stock.

Former democratic political consultant to Alan Hevesi.  Part of the Pay to Play scandal in New York.  He had to turn over 19 Million dollars as part of his punishment.

Ja-Rule says he and Hank were undefeated in basketball

Hank had a jumpshot, man.

Ja-Rule made is share of money as well.  If you think, a typical artists on a major label can make between $.75 and $1.50 for every album sold, and Ja-Rule has sold over 40 million albums, at worse he’s made  $30 Million in just album sales.  This does not include tours, appearances and sponsors.  Although it’s hard to believe celebrity net worth puts the rapper at $40 Million.

Of course he has also taken the time to get his next album ready and write rhymes for the one after that.  Artists do their best work when they are locked up, but it’s usually before they become famous.  When they are in real prisons, worried about getting shanked, not learning how to legally rob a bank.

Despite Ja-Rule remaining behind bars another year until February 2013, the show must go on.  His label will drop the album Pain is Love 2 this month.