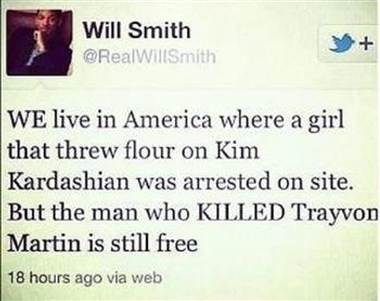 This is great! First of all, Will Smith doesn’t even have a twitter account. So @RealWillSmith is not Will Smith, it’s actually a white man who lives in Nashville, TN!

The tweet, which actually makes a good point states:
“WE live in America where a girl that threw flour on Kim Kardashian was arrested on site. But the man who KILLED Trayvon Martin is still free.”

Just so you really think it’s the real thing, there is a nice pic of Will Smith included in the twitter profile.  Coming from your average Joe, this tweet holds little weight, but coming from Will Smith….now that’s a statement. The validity of the statement was further enhanced by the number of famous people retweeting it. The message was retweeted by the likes of Spike Lee, Rosie “out of a job” O’Donnell and Omarosa!

Don’t believe everything you read, especially on twitter!!
-COSMO
Get Gossip From All The Best Sites In One Place! News At A Click