Rihanna Tells Elle Magazine That She Will Do what She Wants, Including Continuing to See Chris Brown. 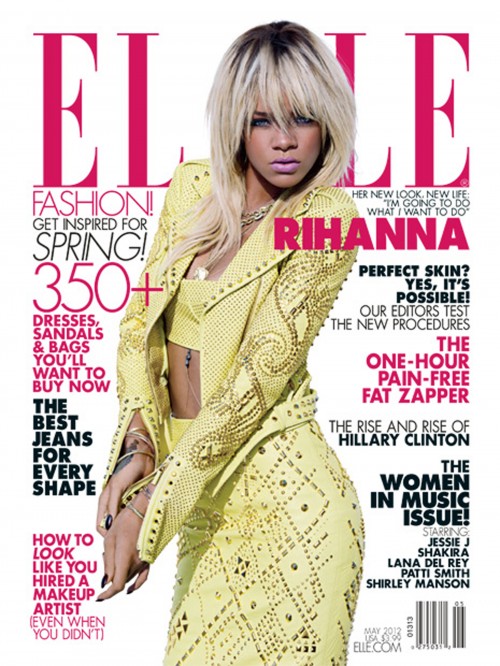 This isn’t really news, we knew from Rihanna’s past tweets that she could give a rats ass what people thought about her seeing Chris Brown.  She reiterated her position during an interview for May’s issue of Elle’s magazine.

In response to the media backlash that Rihanna received when it was discovered that she recorded two remixes with Chris Brown she tells Elle magazine,

“I respect what other people have to say. The bottom line is that everyone thinks differently. It’s very hard for me to accept, but I get it.

Did she say wasting time on blogs?  Hey!! I resent that!

Basically Rihanna feels that the ass-whoopin she got from Chris Brown back in 2009 exposed her to the public so much that she could then do whatever she wanted without the fears of being judged.

It (the assault) gave me guns. I was like, well, f**k. They know more about me than I want them to know. It’s embarrassing. But that was my opening. That was my liberation, my moment of bring it. I wanted people to know who I am. Whatever they take that to be, good or bad, I just want them to know the truth.

“I have more freedom the more people know about me. It’s like, one less skeleton in the closet, one less burden, one less secret; now you know that, so you can say what you want about it. I don’t have anything to hide.”

My issue has never really been with Rihanna, but more like the message that she is sending to young girls everywhere, that Chris Brown’s behavior is ok.  For the record….IT’S NOT. There are some mistakes in life that just shouldn’t be forgiven  He didn’t slap her, Chris Brown went straight UFC, cage match on her. It’s NOT OK.   So Rhianna this blog says, do whatever you want, I’m more worried about the thousands of your fans who aren’t as famous, as rich or as beautiful and might not receive help as fast as you did.