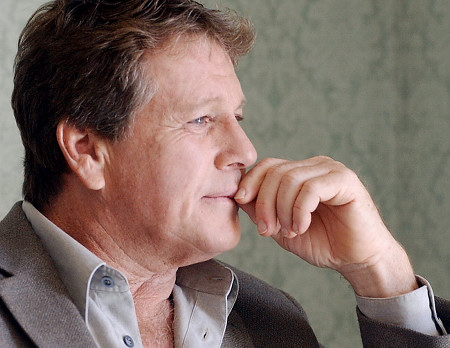 Actor Ryan O’Neal Has Been Diagnosed With Prostate Cancer

He stood by his girlfriend Farrah Fawcett as she battled with cancer until her death in 2009 and now he has a cancer fight of his own.   O’Neal is no stranger to battling illness, the 62 year old beat leukemia in the late 90’s and according to a statement released by his publicist he’s ready to beat cancer.

“Although I was shocked and stunned by the news, I feel fortunate that it was detected early and according to my extraordinary team of doctors the prognosis is positive for a full recovery, I am deeply grateful for the support of my friends and family during this time, and I urge everyone to get regular check-ups, as early detection is the best defense against this horrible disease that has afflicted so many.”

If you are wondering what you have seen O’neal in lately he played Lanette Scavo’s father in law in Desperate Housewives, and he’s Spencer Montgomery, Ted’s father in the new 90210.

He also has written a memoir entitled Both of Us about his life with Farrah Fawcett which is due out in May.

RYAN O’NEAL NOT WITHOUT CONTROVERSY

With the buzz of the internet stories and news about O’Neal that we never knew before hit the news.  He was caught hitting on his daughter, Tatum at the funeral for Farrah Fawcett.  He didn’t recognize his own daughter, not to mention you are burying your lover and hitting on the next chick. Ryan explained,

“I was just trying to be funny with a strange Swedish woman. … It’s so sick,”

Ryan’s son Griffin described his father as an,

“abusive, narcissistic psychopath” who exploited Fawcett’s death from cancer. “I consider him a vulture presiding over a carcass,”

With all that he’s been through Ryan will take the challenge of cancer head on.  If we know anything for sure about him, is that he’s tough.  We wish him the best.