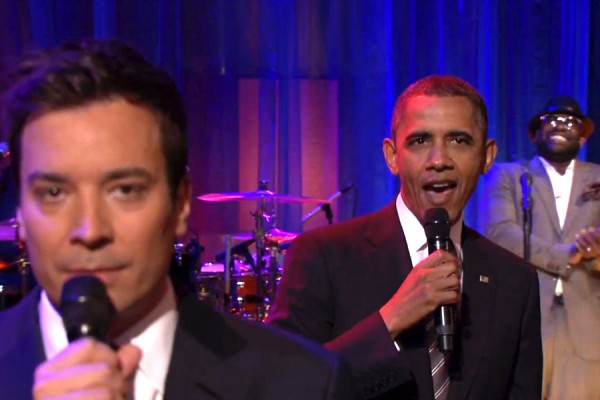 President Obama on Jimmy Fallon, Slow Jamming the News is Worth the Watch [video]

If you haven’t seen or heard this video yet, it’s definitely worth the watch.  Is it over-hyped?  Yes.  But what isn’t over-hyped these days.  When they say that Obama is slow jamming the news, The Prez is literally slow jamming the news.  It’s a serious issue and he is spitting the facts with Jimmy Fallon and The Roots backing him up.

Pro- Obama or not this is just funny and mildly historic.  No other President could pull this off.  During the bit Jimmy calls the president “the Preezy of the United Steezy”, “The Barrack Ness Monster”, and “the Potus with the Mostest”.

How can you not love “The Barrack Ness Monster!!” All of those are definitely T-shirt worthy.

The news in which The President was reporting on had to do with student loans and the increases that are expected to come.  He , Jimmy Fallon and the Roots were all at the University of North Carolina Chapel Hill.  When Obama appears from behind the curtain the audience goes “Justin Bieber” wild.  Then when he introduces himself, they erupt again.

‘I’m President Barack Obama and I, too, want to slow jam the news,’

Then Fallon screams to The Roots

Obama goes on to talk (not sing), about the interest rates on student loans doubling starting in July which is indeed a very serious subject.  After every pointed fact, Fallon chimed in with ad libs and was further backed up by “The Roots”.

‘Oh yeah. You should listen to the President. Or as I like to call him, the Preezy of the United Steezy.

Then the roots backed up the whole production with smooth R&B melodies and someone singing in a smooth jazz voice things like,

‘Aw Pell no, if Congress doesn’t act it’s the students who pay, the right and left should join on this like Kim and Kanye.’

The popular appearance came during Obama’s two-day, three-state tour of college campuses.  As certifiably the coolest president ever, college votes will be key to his reelection.  Watch the video below.