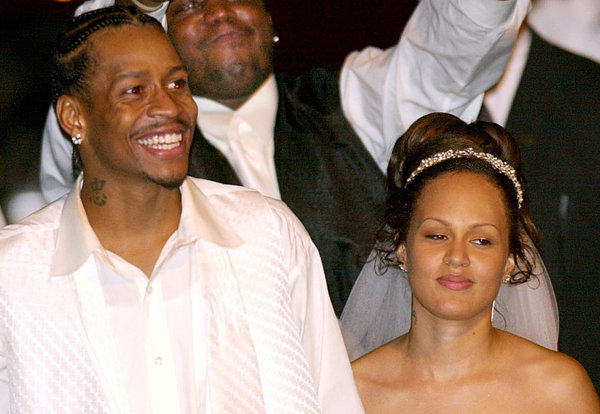 Allen Iverson’s Divorce is Back On, Wife Tawanna Files for a Restraining Order

I remember when A.I. used to be the answer. Now he is just one big question. Where is he? What is he doing? What’s going on with him?

ON AND OFF DIVORCE

Iverson and his wife Tawanna met in high school and have been together ever since. (You can tell the High School sweethearts – they look like normal women….).  After the initial divorce filing the two have tried to reconcile. The divorce is allegedly because of Iverson’s cheating. At one point Tawanna wanted to know everyone he slept with. In court documents she requested that Iverson submit,

“the name and telephone number of every person other than your spouse whom you have had sexual relations and/or intimate physical contact from the date of the marriage to the date of trial.”

A.I. then tried to put a stop to this by stating that he was still living with and having “relations” with his wife. Only three weeks ago he filed a motion to dismiss the divorce citing that he and Tawanna have

“resumed their marital relationship, cohabiting, having sexual relations and holding themselves out as husband and wife.”

Now, it appears things are back on and heating up. Tawanna filed for a restraining order citing that A.I. has been,

“engaged in increasingly contemptuous, threatening, and disturbing behavior” over the last few months”

She also claims that Iverson is stashing money, hoping to hide it from her legal team so he comes out ahead on the divorce.

It should be no problem for A.I. to adhere to the order for now because he is currently in Shanghai on a NBA legends tour and he is also talking about moving to China to play in their Chinese basketball league.

Let’s hope this gets resolved quickly, the couple has 5 children together and this can’t be good for them.[more…]