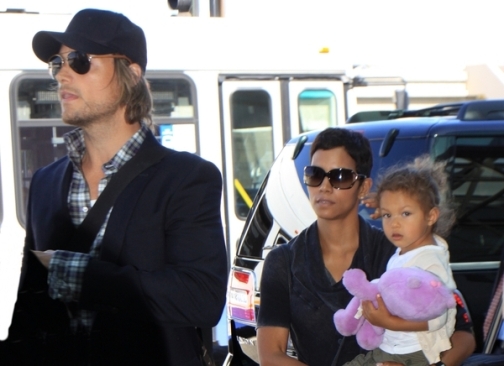 Gabriel is trying to take Halle to the Bzzank! (Pro-nounced “Bizz-ank”).  Today it’s revealed that the Calvin Klein model is trying to get P-A-I-D.  He seeking $500,000 in legal fees and $20,000 a month in child support.  He was scheduled to hit court today but got delayed when the judge realized that he had not filled out his paperwork properly.

He needs a proper environment in which to care for the four year old.

Really? For $240,000 he can get a proper environment for his daughter and himself and never have to work again.  Who said models were stupid??

The legal fees might be legit and still piling.  He basically had to stop Halle Berry from taking his daughter to France, where Oliver Martinez is from.  That is definitely a scum-bag move on Halle’s part.  She defends he actions by saying that she could better protect her daughter from the media.  She feels that the laws that are in place in France will offer a safer environment  She stated,

‘Laws that protect children, protect right to privacy. All I want is for my family and myself to have a normal life. When I’m not at work, that’s very important to me.’

She also says that Gabriel works on and off and could visit his daughter often.  The judge has yet to rule on the case. [more…]For contests, gossip, exclusive coupon codes, and giveaways subscribe to our newsletter