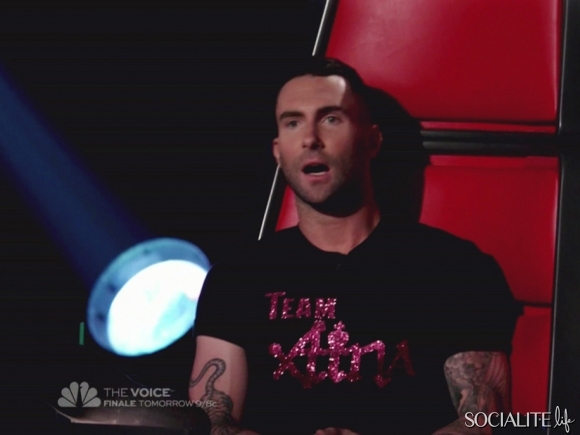 Now that Season 2 of the Voice is over, so is the feud between Christina Aguilera and Tony Lucca.  Christina actually offered Lucca an apology after the competition ended.

“She just wanted to clear the air a bit, that this became much more of a dramatic thing than she ever intended it.”

I think she felt ok apologizing because her greater mission was done; and that was for Tony Lucca not to win.  Period.

This has been a season of Christina just being a total b**ch, finding fault with every performance even up to his last.  She commented that his rendition of Jay-Z’s 99 problems was good despite its “derogatory” connotation to women.  Adam Levine had to remind her that it was a freakin’ “Metaphor”!  She then said that her contestant Chris Mann was a real man  after his performance eluding to the fact that he didn’t have to defame women to put on a great show.

Christina’s cattiness became so predictable that Levine wore a shirt that said Team Christina under his jacket during the final performances. When Christina went into her predicted tirade, he stood up and whipped off his jacket revealing a bedazzled shirt that said “Team Xtina”.  It was fantastic and the crowd went wild.   She could only feel stupid.  Levine had her number and she played right into it.

Lucca also flipped the script, using Aguilera’s nastiness as fuel to push him into the final four,

“Her criticism for the most part has inspired me and led me to a higher plane than I might not have found otherwise.”

He accepted Aguilera’s apology without issue as he wants to move forward positively.  He explains,

“I said to her, ‘I hope that we can be cool moving forward,’ I take pride in the fact that my whole career has been a career of integrity, and sound relationships.”

Although Lucca got an overall third place in the competition, he will most certainly score a major record deal if it hasn’t happened already.  Despite Christina’s criticism even she has to admit the man has talent.