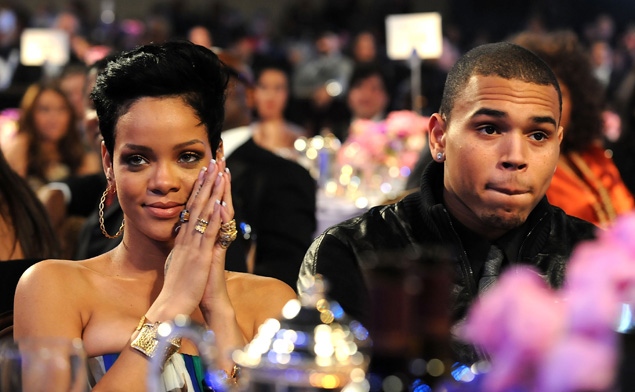 Chris Brown and Rihanna Stop following Each Other on Twitter after C-Breezi Posts a Link to his freestyle. [audio]

These two can’t even get along on social media.  It was news when she started following him again and now it’s news that she’s not.  At least this one comes with a freestyle.

Chris Brown went in hard on a freestyle to Kanye’s Theraflu (now renamed “Way Too Cold” after Ye’ almost got sued by the old medicine company).

Brown tweeted out a link to the freestyle and soon after Rihanna unfollowed him.  How bad was it?  You be the judge.  Everyone is speculating this is the part that RiRi found offensive,

Don’t F**ck with my old b**tch, it’s like a bad fur
Every industry n**ga done had her
Trick or Treat like a pumpkin just to smash her
B*tches breaking codes, but I’m the password

The lyrics could be referring to Rihanna’s recent wildin’ out.  She calls  this persona “Ratchet Ri Ri, where she is posting instagram pics of her in the strip club making it rain, then Ashton Kutcher rendezvous, Drake rumors and now Oakland Raiders running Back Darren Mcfadden.  (I will address that in a few…).

This could be the reason for the freestyle.  He’s disappointed, jealous and he can fire shots and then not take ownership of said shot fired because that’s what guys do. We do the reverse flip and blame it on you.

After Brown unfollowed Rihanna back he flipped he script with another tweet,

Assumptions! I didn’t say any names so if u took offense to it then its something you feel guilty about. (sic)”.

Basically saying, you are over reacting, but is there something you are not telling me.  Now she is on the defense.  Take notes ladies, that’s game.

I say if this is what it took for her to be done with him then good riddens.

How the story goes…at least for now, Rihanna was in Hawaii promoting her new movie “Battleship” when she saw Darren with his girlfriend on vacation.  McFadden introduced himself and Rihanna brought him and his girlfriend a drink on the beach and that was that…. It only turned in into more when she was seen at the strip club a few days later rocking a Raiders Jersey.  Was that a message to McFadden?  I would say yes, and I would say McFadden’s girl needs to be put on notice.