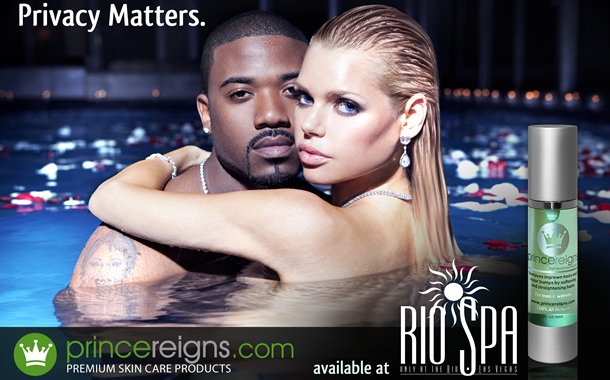 Ray J continues to impress me with his business acumen.  The independent artist’s accolades include,  somehow sliding into his sister Brandy’s sitcom, getting two seasons of his own reality show, and then another two with his sister and their parents, and let’s not forget how he managed to legitimize his sex tape so much so, that it can be ordered at any Best Western.  He has now inked a new deal.  This time it’s for Prince Reigns Ingrown hair Serum.

It’s a line of skin care product that is supposedly made with all natural ingredients including Aloe Vera, eucalyptus, chamomile, sage, lavender, vitamin E and citrus oils. .. as Eddie Murphy’s character would say in Coming to America, “Natural Fruits and Berries”.

Ray J filmed the first commercial for a new product that the company is launching.  The ultra-sexy spot also stars Sophia Monk who reportedly also received a $1 Million check from the company.

Who knew prince Reigns had an advertising budget that large?  The product has actually been around for 20 years and has been personally endorsed by Oprah!  Cha-Ching.

The product that Ray J and Sophie Monk are promoting is set to be launched during this year’s Billboard Music Award.  Peep the super sexy behind the scenes filming of the ad spot.