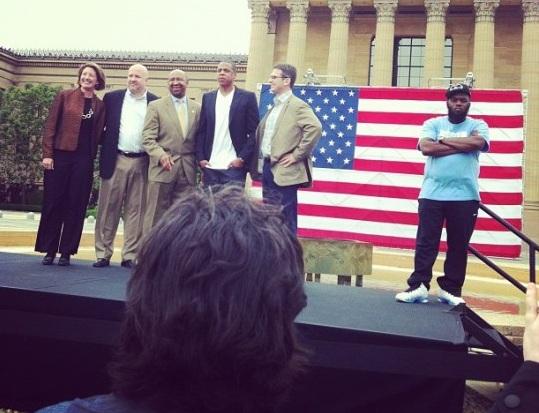 Jay-Z Casually Disses Freeway in Front of his Home town of Philly. Watch the Video

Well if you believe everything you read on the internet you would believe that freeway was crashing the party as Jay Z took the stage during a press conference.  That has been confirmed as false.

Jay-Z was in the city of brotherly love to make an announcement that he was headlining the Budweiser “Made in America” music festival this Labor Day weekend. Freeway and Jay-Z talked before the event, planning for Freeway to come on stage when given the cue.  In the middle his presentation Jay-z says,

“Everyone knows my love affair with Philly from the amazing, talented artists I’ve signed from here,”

He then looked towards Freeway indicating for him to take the stage, at the same time saying,

After the speech another event organizer or sponsor or politician, complete with geeky smile and glasses takes the stage.  Freeway is standing next to Jay when Jay-Z ushers, maybe even pushes him off to the side and then welcomes the suit closer for a photo-opt.  Weather Freeway wants to acknowledge it or not, he got played.

Many are trying to defend Jay-Z by saying that Philly Mayor Michael Nutter, who was in the picture did not want to be photographed with an ex-felon.  That’s crap.  I’m the biggest Jay-Z fan, but he could have brought freeway in closer, gave him a pound and then took the picture.

To make things worse, he walks off the stage past Freeway with zero acknowledgement. You can read into this many different way but remember that Jay-Z is a superstar, if he wanted his mans’ up there for photographs it could have happened.  That was just blatant disrespect.  Maybe Freeway should have threw on a Blazer, I don’t know but it was ill.

Don’t take my word for it, watch the video and tell me what you think.