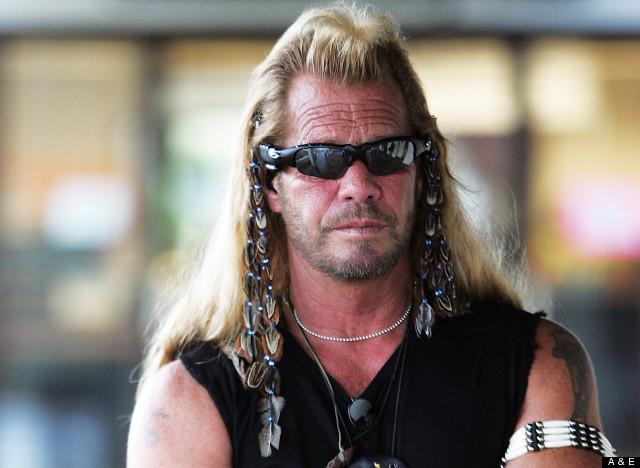 After 8 Season we will be saying good by to Dog The Bounty Hunter.  A&E is pulling the plug.

Duane Chapman should consider himself lucky he took a one shot appearance and rolled it into a Franchise. He first appeared on a show on A&E called “Take This Job”.  It was a show that profiled people with unusual careers.  After an overwhelmingly positive response after Dog’s episode aired, the network took a risk and a year later Dog had his own show.  Chapman didn’t disappoint.  The danger of the job mixed with the volatility of his family life made the perfect balance to draw in viewers.  As the show grew A&E then began to broadcast it internationally including major television markets like Germany and New Zealand.

I think the Season 9, “no mullet rule” was a deal breaker.

There has been no official statement from A&E who has also cancelled Breakout Kings.  Dog was the networks first breakout reality TV hit giving way to other recent reality shows such as: “Swamp People,” “Gene Simmons Family Jewels,” and “Duck Dynasty.”

According to Nielson the ratings for the show hung out around a .8 for adults 18-49.  Which means out of every 100 people almost 1 person would be watching that show.  This isn’t bad.  To give you an idea, the Pauly D Project is getting around a .7 for the same demographic.  It’s hard to tell if ratings were the reason or recent show departures.  All we know for sure is, Duane Chapman will now be only receiving one check, and that’s from Bounty Hunting.