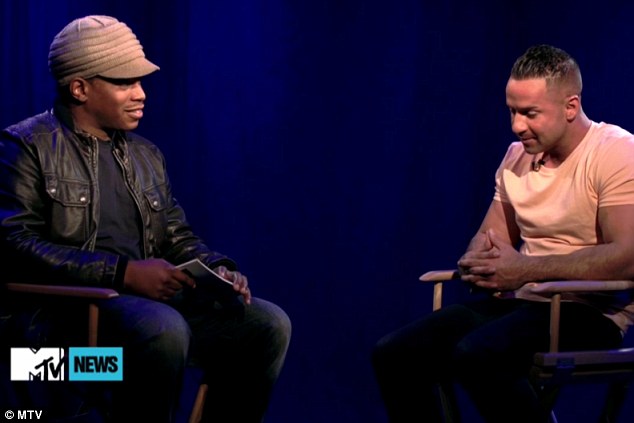 After his stint in rehab Mike The situation Sorrentino talks about “losing it” and realizing that he had a…well….a situation.

The Situation credits Utah’s Cirque Lodge Treatment center for his recovery.  He spent 3 weeks there detoxing and recovering from what he calls a certified prescription drug addiction.  He still says that every day is a day to day struggle, he told MTV’s Sway in an interview,

Ever since I’ve been out, I won’t like, it’s not been easy…but at the same time, I’m at a good place.  It just took a little while to get there.  In the Beginning there were a lot of rainy days

HOW HE KNEW HE HAD A PROBLEM.

Mike said that he knew there was an issue when he was struck by extreme fatigue as he tried to dress for an appearance.  His entire wardrobe was laid out for him, yet he still struggled to get dress.  The Situation explains,

‘When I was in Australia, I had a simple appearance for an hour, but I was so tired I had trouble getting dressed. ‘The outfit was laid out for me… all I had to do was jump in the shower and put the clothes on.

‘I had my whole team there, my brother and best friend, who were,  like “If Mike doesn’t get up, we’re going to have a problem.” I eventually got up, but I realized right there and then… I need to ask for help. This thing is bigger than me. I couldn’t do it alone.’

He said that he continued to lie to himself and say that the pain killers were giving him energy instead of making him worse.  He realized that if he went down his entire family would go down as they all work closely with him.   He knew he needed help but didn’t know how.  With support of his real family they figured it out.  He says,

My brother Mark and sister Melissa approached me… it was on my mind that I needed help, but I didn’t know how to go about it. But with them we made the necessary steps to get help.’

He also said that he got well wishes from all the house guests and he regrets the fact that he and Snooks are long longer close.

‘We used to be very close… I’m upset we’re not as close as we were, I care about her. She’s a great person. I should apologies for hurting her feelings.’

Despite the Douche he plays on TV, Mike said the real Situation is actually a nice guy,

The Real Mike is A positive, generous, loyal person. Someone who will help if you call me up and say you’ve got a flat tire, I’m there.

You can watch the video of Sway’s interview with The Situation below.