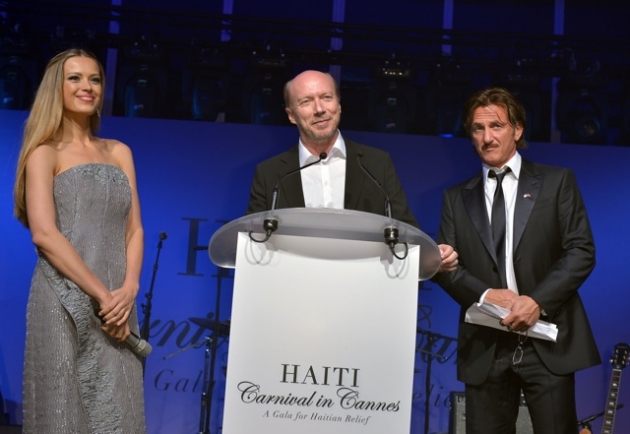 Sean Penn loves Haiti just as much as Wyclef Jean!  Two years after the devastating earthquake, many of us have forgotten the pictures and video of just how much damage had been done.  Penn has not.

Just hours before putting on the fund raiser Penn went on record blasting the media for basically not continuing to provide a spotlight on Haiti’s troubles, He ranted,

“It’s not only celebrities who went for a day, It’s the whole fucking world. It’s all of you.

The reason we have Haiti fatigue is because there was never a commitment in the first place.”

“It’s time our elegant and formidable president stood side by side” with the new president in Haiti,

Penn then walked his talk by using the Cannes Film Festival to remind people and raise money.  He put on an event called “Carnival in Cannes Gala for Hatian Relief”.  It raised over $2 Million dollars.

Although the bidders names were kept anonymous, for an event that didn’t have anything to do with movies, it brought in some heavy hitters: Gerard Butler, Diane Kruger, Ben Stiller, Chris Rock, David Schwimmer, Ewan McGregor, Jada Pinkett Smith, Tom Hardy, Robert De Niro, Sean Combs, and Harvey Weinstein. Looking at that list $2 Million is chump change!

I say kudos to Penn for all his work and effort with Haiti and fund raising, but the criticism and rants only accelerate his unpopularity.  You can’t criticize the entire media and yell at the world because they don’t’ support the same causes that you do.  Well you can, but then you come off as an irritating douche that people give money to just so you can shut the “F” up.  Not to say that Haiti support is not important, but there are local disasters such as people still being homeless years later from Hurricane Katrina that are fighting for our medias attentions.  Last time I checked, cursing and criticizing were not in the checklist of methods on how to raise money.