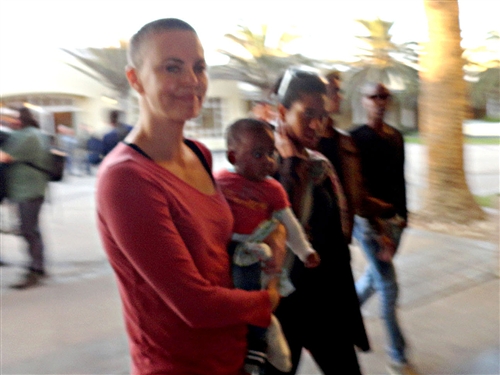 Charlize Theron Let’s her Dome Out in Namibia for the World to See.

Charlize Theron finally let’s us see that chrome dome – and it’s a doozy.  The bombshell now looks like an egg shell.  She hid her head for almost the entire month and finally the heat must have been too much and the hat was off!  Theron was spotted with her adopted son Jackson in Namibia in all of her bald glory.

WHY DID CHARLIZE THERON CUT OFF HER HAIR?

For Mad Max Silly.  The fourth installment of the movie that put Mel Gibson on the map.  The original Mad Max came out in 1979 and now 33 years later the fourth film, Mad Max: Fury Road is finally being shot.

Theron agreed to do the role opposite Tom Hardy back in 2009 but there were a series of production delays.  Finally things are now underway.

During an interview with US Weekly, Theron said regarding cutting her hair for the role,

I’m very excited about it.”

“The original Mad Max created such a vivid world, so to go back and re-imagine it and re-play in that sandbox sounds like fun to me,” “It’s a really challenging piece of material.”

Out of the list, I think Demi rocked it best.