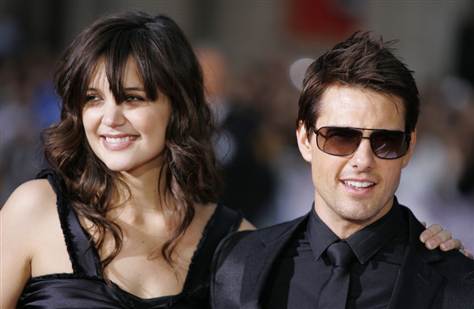 You can’t really tell me that you’re surprised.  This is Hollywood.

“This is a personal and private matter for Katie and her family “Katie’s primary concern remains, as it always has been, her daughter’s best interest.”

I love how the engagement and marriage is public but the divorce is not.  Personal and Private my a**.

The two have been married since 2006.  They got engaged only after two months of dating.  Back then Cruise was 43 and Holmes was 27.  The difference in age seemed staggering.  Now Cruise at age 49 and Holmes at 33, the gap doesn’t seem to be nearly as much.  Then throw in the fact that Cruise is in phenomenal shape for “an almost” 50 year old.

The couples only child together is, Suri Age 6.

If you remember back in 2005, she was the cause of all that couch jumping crap on Oprah.  It was back in 2005 and he was professing his love for Holmes.

I love relationships. … It just happened,”

I kept looking [at Katie] and thinking, ‘This woman’s amazing.’  I’m happy that I’m with her. She’s amazing, and I’d think the same of her even if she wasn’t with me. She’s just amazing

She was just as bad…probably worse.  Holmes at the time said of Cruse,

“From the moment I met him,” she said, “it just felt like I’d known him forever. I was blown away. He’s the most incredible man. He’s so generous and kind, and he helps so many people, and he makes me laugh like I’ve never laughed, and he’s a great friend.”

With all that love gushing from every pore, you wouldn’t think they would have a pre-nup right?

DOES TOM CRUISE HAVE A PRENUP?

Reports are that they do.  The couple is said to be worth approximately $275 million.  If I had to guess $274.5 million of that is Tom’s.  I’m sure Katie’s Dawson Creek money has dried up long ago.

The couple reportedly have hammered out a prenuptial agreement that will give Holmes as much as $33 million. Holmes got paid $3 million a year up to $33 million for each year she has been married to Cruise, plus she gets their home in Montecito California.  That means Katie walks away with a little more then $15 million.  Sounds like a win win to me.

So now we have the What is Happening, we just have to find out the Why!