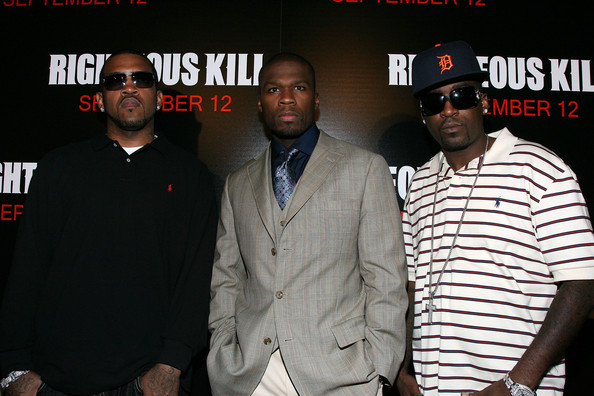 Did 50 Fire Shots? Or was he Just Speaking the Truth About his Relationship with Banks and Yayo? [audio]

50 was on Big Boy’s neighborhood radio show discussing the status of G-unit and how he basically needs to let Yayo and Banks do their thing.  It’s a tough love situation.  This should come as no surprise because back in May, 50 revealed that he hadn’t had communication with Lloyd Banks in like 9 months.  Although he indicated that this was not the first time, it was the first time that we officially heard that the two were not communicating on a regular basis.

He told Big Boy back via a phone interview,

He goes through these things where there’s no communication and he goes off and does what he wants, it’s set at that point because I’ve spent marketing dollars so he can go wherever he wants to go and actually go do shows, make money and do other things, At that point, it’s fine for him to move around and go do it by himself. I want them to be individuals and operate on their own away from me, I’m fine with it. … We can get on the phone together, but I haven’t spoken to him. I haven’t spoken to Banks in nine months. But this is not the first time this has happened. He’s a baby. He’s the youngest in the actual G-Unit, he got really rich at 19. Both him and Tony [Yayo] have made over nine million dollars. With [Young] Buck, it was almost eight million dollars.”

50’s tune hasn’t changed much.  In this most recent interview he sounds like a disappointed father who put a lot of work and effort into a son who has talent but doesn’t practice his craft.  Someone who can see that talent wasted is worse than having no talent.   Fif says,

“I’ve enabled them to a point where they feel like they don’t have to do anything,”

And he also says that Tony Yayo needs to step up to the plate,

“Yayo has to do a lot more. He just doesn’t do what he’s supposed to do.”

Big Boi also tries to make sure if there was any beef simmering between the G-unit members that it was cooked up proper.  He asked 50 if he had a show next week, who would come out and perform with him.  Fif says” Yayo”.  Big Boi earlier asked 50 if he was on a raft and Yayo and Banks were drowning, which one would he save?  Any Guesses?  (Listen to the interview for the answer).

50 is quick to say that they are both like his little brothers and that he could never make the choice between the two.

Now this can go 1 of 3 ways.  Yayo and Banks can be pissed about this, wage a war against 50 in which they can’t win, although their egos might tell them otherwise, or take 50’s advice and get to work.  Or the third option, continue to do nothing and count the stacks they have already earned.

I suspect 50 is not as easy to be around when you are no longer hungry.  50 has that insatiable hunger that never dies.  Puff has it, Floyd Mayweather has it.  It lets them continue working with the same drive and determination they had when they were broke.  In some cases, work even harder.  Give any hood cat $8 million dollars and see how hard he works after that.