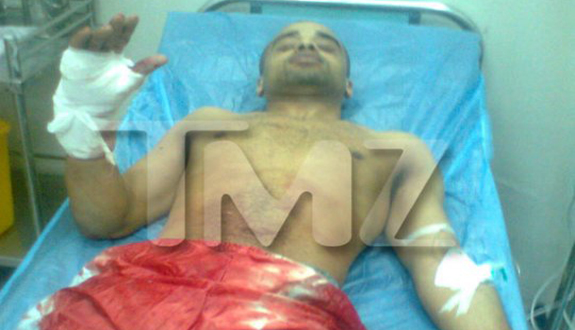 De’Mario Monte Thornton aka B2K’s Raz B slashed his wrists so bad he almost died. Really!

They are labeling it a freak accident, not because he’s a freak, but because how the accident happened.  Just fresh off a performance in Shanghai and back in his hotel room Raz tripped.  When he went to put his hands out to catch his fall he fell into and through a sliding glass door.  Luckily there were others present who called the hotel staff who later called an ambulance where Raz was rushed to the hospital.

The shards of glass slit his wrist right down to the bone.  He lost a near fatal amount of blood and was rushed to Shanghai Huashan Hospital hospital.

A tweet of the injury shows just how bad it actually was.  You can see the bone.  The glass not only split his wrists but also pierced through ligaments, nerves and tendons. MAN…. Cherish life and your loved one’s. You just never know. THANK YOU LORD FOR SAVING MY LIFE.

The entire operation procedure took 5 hours.  Raz had to cancel all of his remaining tour dates so he can properly recover from the injury.