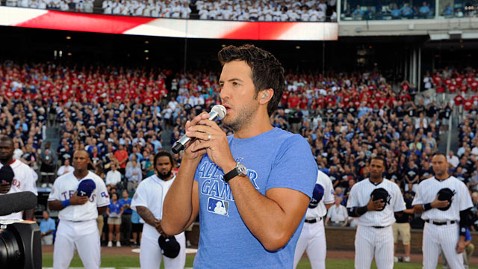 Luke Bryan Apologizes For Cheating While Singing the National Anthem!

This is just a case of some one being too honest.  During the MLB All Star Game Luke Bryan was honored when the MLB tapped him to sing the national anthem.   The country  singer did a decent job but drew criticism because he actually had the words to the anthem, written on the inside of his hand for cheat notes.

The criticism came through all social media, with twitter leading the way. Here is a typical angry fan’s tweet:

“Luke Bryan’s version of the national anthem @ the All-Star game last night was an epic fail. He needs to learn respect & remember the lyrics!”

Luke, took to twitter to defend himself, explaining why he did, what he did.

“I had a few keys words written down to insure myself that I wouldn’t mess up. I just wanted to do my best. I promise it was from the heart,”

“If I offended anyone with my approach I sincerely apologize. Anytime I sing the anthem it is an honor and my heart beats out of my chest.”

That wasn’t all he caught flak for.  He also checked the time while he was singing, but for that he also had a valid reason and tweeted again in his defense.

“I did check my watch because I knew the stealth bomber would fly over 2 minutes in and I knew a started a little late,”

Personally I’d rather he do that, then screw it up.  You might see it as being unprepared, but it’s easy to get caught up in the moment like Christina Aguilera did.  You can barely tell what he’s doing, if he didn’t admit to it, you would have never known.  Sometimes it’s just best to say nothing.

What do you think?  Can you tell if he is looking at the words or not?