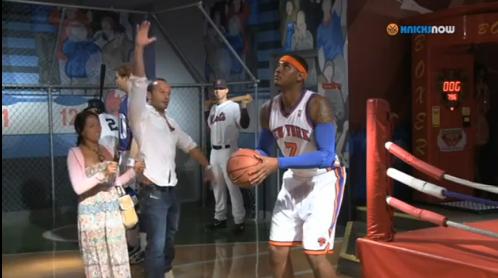 Carmelo Anthony Tricks The Public, Poses As His Own Wax Figure

Last month, Madam Tussauds created a wax figure of Carmelo Anthony.   Traditionally when Madame Tussauds reveals a was figure, the celebrity is invited down for the unveiling.  After seeing the figure, of himself, Melo thought he would give fans a treat.  He threw on his Knicks Gear, grabbed a basketball and struck a pose on the podium waiting for fans who came by to see his wax look alike.

As the fans got close, Melo came to life.  Carmelo Anthony said he’s done some acting before but nothing like this,

“I do some acting but that was probably one of the toughest acting jobs to do, Cause it is right on the spot.”

I hope Madame Tussauds was selling extra draws at the gift shop because I’m sure someone crapped their pants when the wax figure came to life.

Here is the video: