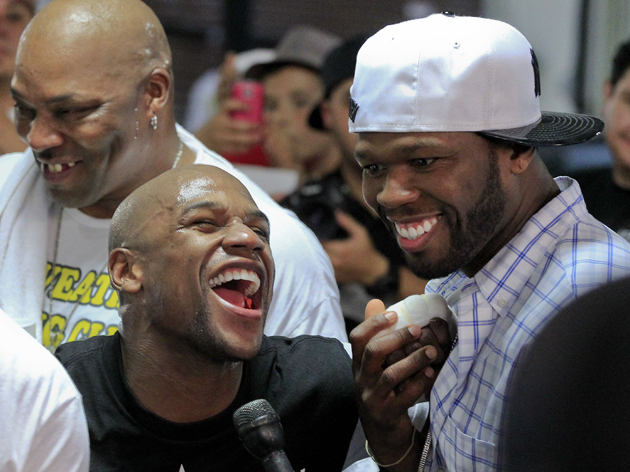 50 Cent has Teamed with Floyd Mayweather To Take Over Boxing, Attack De La Hoya on Twitter

It was only a matter of time before 50 Cent and Mayweather put their money together, and appears that it will be in the ring instead of the studio.

Floyd Mayweather is currently on lock down but will be getting out really soon.  “August 3rd” that’s how soon.  He had an 87 day sentence but is being released for good behavior.  Once he’s out, he and 50 Cent plan to take the boxing promoting world by storm.

50 received his official promoter’s license from the New York Athletic Commission and has affiliated himself with TMT Promotions.  That stands for the The Money Team!  All licensed up and ready to go, 50 begin his promotional activities by doing what he and Floyd do best – talking smack.

Actually Oscar started the exchange by mocking 50 saying that everyone wants to be a promoter.

This is all 50 needed to go in hard, and he did.  Referencing Oscar’s pictures on the internet dressed in drag, 50 proceeds to refer to De La Hoya as “girl”.  Super disrespectful. De La Hoya sees that he is under attack and tries to retract his initial mockery but it’s too late and 50 calls him out on that as well. This new partnership between 50 and Floyd is not to be taken lightly.  Floyd made 80 million last year, placing himself at the top of the money list for all athletes.   Anyone promoting him stands to make a fortune and will be a major player in the Game.  Now let’s see if 50 can get Floyd to fight Paquiao.   That’s a fight that would need no promotion.