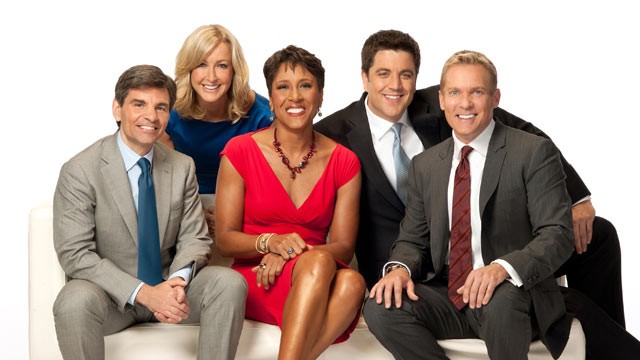 We found out earlier this year that ABC’S Robin Roberts was diagnosed with MD – a rare blood and bone marrow disease.  She will be receiving a bone marrow transplant and thus taking a leave from Good Morning America.

Although there is truly no good time for her to leave, now is especially hard as Good Morning America has recently been going head to head with Matt Lauer’s “Today Show”.  And for the first itme in 17 years have been winning some of the ratings battles.

The producers at ABC are no dummies, they have enlisted a slew of ‘All Star’ talk show veterans to help out until she returns.

Barbara Walters, Diane Sawyer, and Katie Couric are all lined up to step in for Roberts.  Robin thinks she will be leaving at the end of August or the beginning of September….and she says she is somewhat scared,

“It’s fascinating-slash-scary how to prepare yourself for something like this, I do go through moments of fatigue.”

Although she feels fatigue, beating Mat Lauer’s “Today” has put some fire in her belly.

“The run that we’ve had has truly energized me, It’s pretty good medicine, I gotta say, to be taking!”

HOW WELL IS GMA DOING?

This past Thursday was the first time in 17 years that GMA has actually won first place among total views, beating out “Today” with 4.6 million viewers to their 4.25.

Ben Sherwood, ABC News President, took advantage of the 2012 London Olympics games starting up tonight, and put the victory in terms of the games  He said,

“For 852 straight (weekly) races, the ‘Today’ show won the gold medal, going back to 1995,” he said. Then, several weeks ago, “GMA” snapped the “Today” winning streak, “and stood there alone for the first time in 16 years to get its own gold medal.”

“And after 879 weeks running behind in younger viewers, 25-to-54, GMA  is “standing there at the gold-medal podium, unbelievably in an actual statistical tie with the previous champs.”

Sherwood doesn’t want to lose momentum now so I’m sure not only will they be leveraging the all-stars but I’m sure Sherwood will be sparing no expense in funding segments that will keep viewers tuned in for weeks to come  We wish Robin Roberts the best.