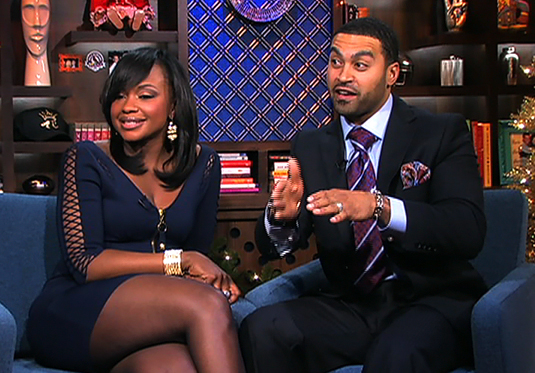 Which Real Housewives’ of Atlanta Couple is Getting a Divorce?

If you are like me, you are immediately thinking its Cynthia and Peter, but it’s not them.   Kroy and Kim just got married.  The only couple left is Phaedra and Apollo!

They definitely are mismatched and I think Phaedra was intrigued with Apollo’s bad boy image but he brings nothing to the table….and I mean nothing.  He showed everyone just how useless he was when he wasn’t supportive of her Funeral Home idea.  However he did show that he was more then just a thug when he gave his speech helping youth.  In general Phaedra and Apollo seemed like they would do well and that we could be expecting another kid soon.  Right?? Wrong!

Phaedra was seen in church this Sunday without her ring and as TRH reports, the couple is arguing a lot and the producers are trying to catch it on film (can you say ratings??), but Apollo is not playing nicely,

“The producers from RHOA are trying to snoop and shoot certain scenes of them arguing, but Apollo is just so aggressive he has started to refuse to partake in any filming. Apollo has even started threatening to take there son Ayden and leave.”

“Phaedra is amazing with her son Ayden and that’s her main focus throughout all of this. Phaedra showed up to Church Sunday with Ayden, without a ring and without Apollo!”

When TRH says “a source”, this is slightly different then most sources.  An insides source here is literally “inside”.  They are usually someone from the film crew that is a part of their lives.  Someone who is literally a fly on the wall.

Is there truth to this rumor? I checked Phaedra’s twitter and the only interesting thing she had was her RIP to Sherman Hemsley, If this is a ploy for ratings, job well done.  I guess we will have to tune in to see if there is any truth to this rumor.