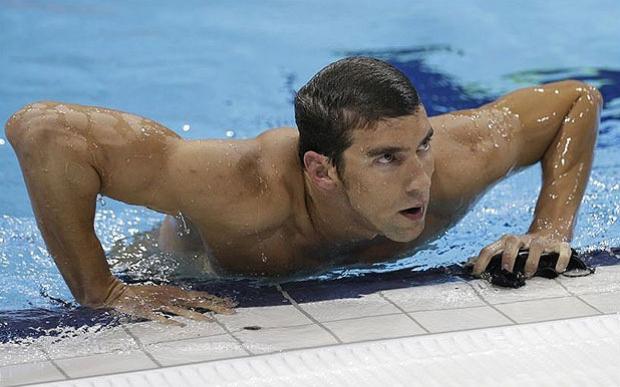 Michael Phelps Gets his Ass Handed to Him in the 400 Meters. Who Beat Him?

This was one of the long awaited events of the London 2012 Olympics and it wasn’t even a competition.  Phelps was looking to be the first male swimmer to win the same event in three different Olympics but it wasn’t going to happen Saturday night.

Ryan Lochte smashed the competition including Michael Phelps by more than 3 seconds.  In fact, Phelps didn’t place 2nd or 3rd.

NO MEDAL FOR PHELPS!

Phelps was just out of it all night.  He barely qualified for the finals and when he was done, he barely had enough energy in the tank to pull himself from the pool.  What a difference four years make, especially when you spend 2.5 of them partying and drinking.

Phelps admitted that he felt like crap during the race,

“It was just a crappy race, I felt fine the first 200, then I don’t know. They just swam a better race than me, a smarter race than me, and were better prepared than me. That’s why they’re on the medal stand.”

PHELPS NOT GETTING A MEDAL, IS THAT REALLY A BIG DEAL?

Yes it is! The last time Phelps didn’t take a medal home he was 15! Since then he has gone 16 for 16, winning 14 gold medals and 2 bronze.  This is a blow, more mentally then anything.

Lochte unlike Phelps was prepared.  He predicted that he would beat Phelps and did.  When he was done he hopped out of the pool looking like he just swam a warm up lap, but he was still shocked by his victory.  The first thing he said was,

“I think I’m kind of in shock right now”

He also felt bad for Phelps because he didn’t even place.  Lochte says,

“I know he gave it everything he had. That’s all you can ask for.”

Phelps still has a long Olympics ahead of him  His chance to threepeat is still there.  He can do it with the 200, and the 100 and 200 Butterfly.  Hopefully this was just a fluke.  He needs to rest, regroup and refocus.

There is no doubt he is cursing the days that he didn’t train, putting the 25 lbs on, and smoking weed.  Three things that the greatest Olympian ever should never do, and now we see why.