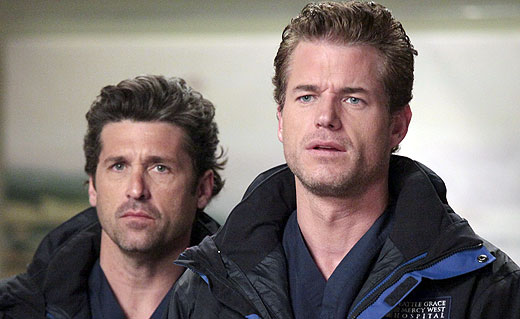 Pardon me readers but I had no idea that Eric Dane was leaving Grey’s.  The news came out last week and was confirmed by Dane and Rhimes both to the press.  Dane will be leaving the show sometime during the ninth season.  He will be doing a number of shows to help close out his character and then POOF!  No more Sloane.

“After much consideration and conversations, he and I have decided that this is the right time for his storyline to end, We’re a big family here at Grey‘s with a long history together and Eric will always remain an important part of our family.”

Then Dane released a statement,

“I am extremely  grateful to everyone at Grey’s, ABC and Shondaland for the experience and memories I have had over the course of this run, It has been wonderful to work alongside and learn from a creative force, such as Shonda Rhimes.”

DEMPSEY TWEETS A LAID UP PHOTO OF MARK SLOANE!

Before ABC made him remove it, Patrick Dempsey tweeted out this picture of Sloane layed up looking crazy!

Will this be how McSteamy makes his exit out of Greys? According to the TV God herself assume nothing.  Shonda Rhimes says that viewers should not making any assumptions about Sloane just becaue he’s leaving.  In fact things are going to be crazy-twisted when the show goes back on air.  Rhimes says,

“When we start the season, we are ahead enough in time where we see the outcome of lots of things. And in the second episode of the season, there’s rewind — we go backwards — to where they’re still in the forest, So you see what happened and in the next episode, you see how we get there.”

I’m starting to worry now if the show will make it to a 10th season.  We know Dempsey is out.  We lost Teddy (Kim Raver) and Lexi (Chyler Leigh) last season.  There won’t be much left.

We will find out soon enough.  The new season starts September 27th.

What do you think, will there be a Season 10?