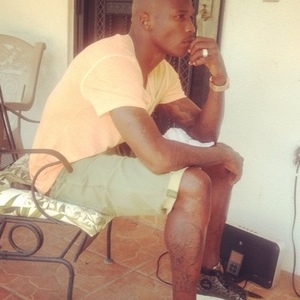 I went from feeling a little bit sorry for Chad Ochocinco Johnson to laughing at him.  He has gone from making a bad mistake to now just making himself look like a fool.  Apparently, he now tattooed Evelyn Lozada’s face on his leg.  Really??  Is it really that serious??

Chad informed the world of this stupid decision (assuming that the tat is real) by posting it on Twitter.  It’s basically Evelyn’s face and underneath it, it says “Eve”.  He used the twit-pic as his profile picture before changing it yesterday.

Ochocinco has been known as an active twitter user (that is how he first met Lozada) so users still contact him with hopes of getting a reply and many still do. Today was no different.  One follower asked him why did he get Evelyn’s face tattooed “post divorce”.  Ochocinco’s response was,

“Divorce? Child please… that’s my WIFE RT.  I don’t give a flying pretzel in skittle rainbow hell what she filed for,” While Chad might think this is harmless, funny, entertaining or cute, what it really is, is sad.  What he’s doing is ruining his chance of landing another NFL contract.  If I’m an NFL coach, desperate for a receiver and on the fence about taking a chance on a 34 year old who is facing domestic abuse charges and going through a public divorce, the thing that is going to push my hand not to give you a chance, is some crazy erratic behavior like tattooing an ex’s face and refusing to accept and acknowledge a divorce.  This crazy behavior will get you nowhere.  The best thing he can do for himself, his career is STFU and train.  Train real hard.  I wish someone in his corner would give him the right advice.  Until then the Ochocinco show is quickly going from comedy to tragedy.