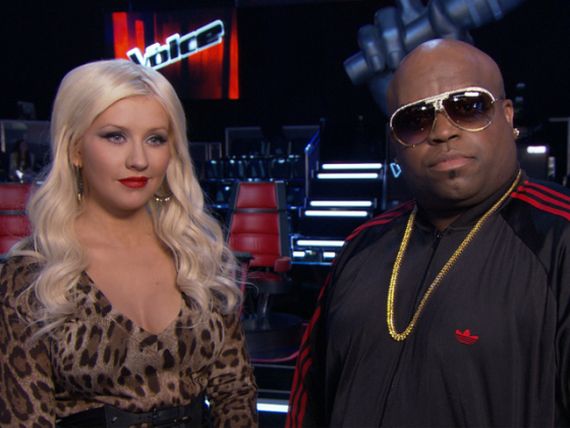 Cee-Lo and Christina Aguilera Will be Replaced Next Season by Two New Stars?

If you are watching and enjoying the Voice then soak it all up while you can.  Next season, two of the judges will be replaced.  Christina Aguilera and Cee-Lo Green our out!

Who will be replacing them?  Are you ready for this?

How about Shakira and Usher.  Not too bad.  I can’t be mad at those choices.  So far Adam Levine and Blake Shelton still keep their names on their rotating seats.

Aguilera was whining to Seacrest on his radio show about the lack of free time she has now that t “The Voice” has taken off far beyond anyone’s expectations. She said,

I guess now she will have plenty of time to tour, promote her new album and spend time with her son.  Be careful what you wish for.   Cee-Lo has a bunch of projects in the works including some shows for NBC.

It would be nice if they do keep Blake and Adam.  It will be an interesting dynamic mixing the old with the new.

“The Voice” is a Mark Burnett production and he is showing both “Idol” and “X-factor” how things are done.  How about lining up the judges early! How about getting top notch talent, and letting people get their lives in order and careers organized around the schedule.  Now why couldn’t Idol land Usher?  Anything would have been better than Minaj.

Now we need to know if Usher’s check will be bigger than Christina’s?  I’m going to say that it better be . His fan base is ridiculous and right now he’s hotter then fish grease!
source