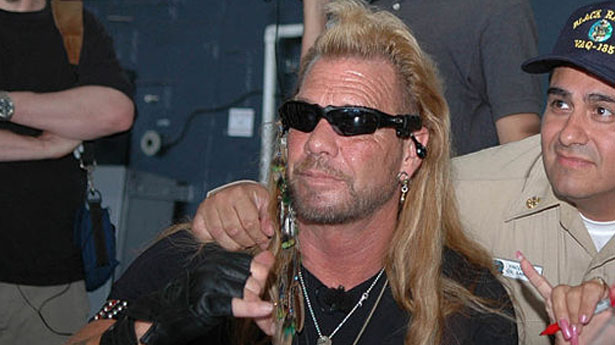 Duane “Dog” Chapman Returns to TV with a New Show

The dog is Back! Dog The Bounty Hunter will be back on TV with a new reality show simply entitled “Dog”.

Deadline.com reports that Duane “Dog” Chapman and his wife Beth will be the stars of this new show.  It will be like Gordon’ Ramsay’s Kitchen Nightmare’s but for Bails Bond agencies.  They will be visiting small, mom and pop bail bond agencies, and using their experience to help them keep their doors open.  They will be offering assistance with bad legislation, untrained bounty hunters and just bad business practices.  Of course, they will also be assisting these bounty hunters as they go after fugitives, just like they did on Dog’s original A&E show “Dog The Bounty Hunter”.

Their new show will be featured on CMT and is set to air in the spring or summer of 2013.  Jayson Dinsmore, the Executive Vice President of Development and Programming for CMT says they had Dog and Beth in their sights for quite some time,

We were aggressive in our pursuit of a show featuring Dog and Beth, one of the most bankable teams in television history.”

They were so sure on Dog, that CMT skipped the pilot and has ordered 10 hour long episodes. After their eight year run on A&E, they knew that a show featuring the Chapman’s is sure to be a winner.