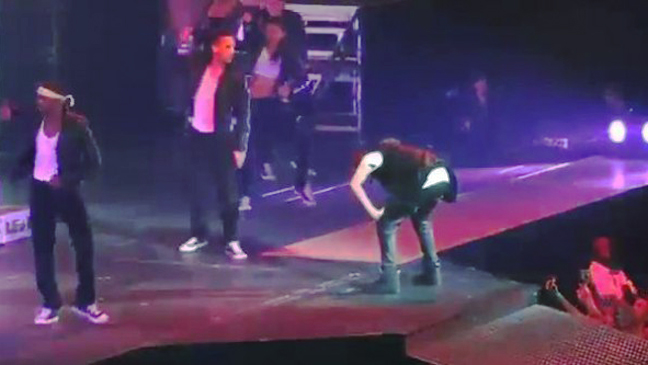 Justin Bieber Vomits on Stage in Front of a Packed Arena!

Some of you will cheer, others will go awww…I’m in the aww camp this time.  The Bieb was in Glendale Arizona where in an unfortunate turn of events…he lost his lunch.  Not once, but twice.

During his song “Out of Town Girl” the Bieb can be seen dancing, or dare I say, “Prancing” forward, when suddenly he turns around and let’s her rip.  The music continued playing and the dancers continued dancing as Justin let out a vomitorium onto the stage floor.  As soon as the last chunks were out, Justin quickly jogged backstage.

While the Bieb was in the back the music finished and some poor bastard had to come up and clean up up the Bieber chunks.

The Bieb came back and apologized to the crowd,

True to his word, he slowed things down and performed his acoustic song “Fall”.  All seemed well until he got to his song with Nicki Minaj.  Minaj wasn’t there but a video of her played as “Beauty and a Beat” began.  The Bieb felt it coming again and took off backstage, this time he was able to vomiting discretely backstage.

A few minutes later he was back again.  Fans were concerned and he addressed the crowd,

“It’s hard for me, you know, not feeling great and throwing up in front of a bunch of people, Will you love me even though I’m throwing up on stage?”

Of course the Beliebers all screamed an emphatic YESSS!!

I have to give credit where credit is do, The Bieb is a trooper.

AND NOW….I bring to you the chunks….