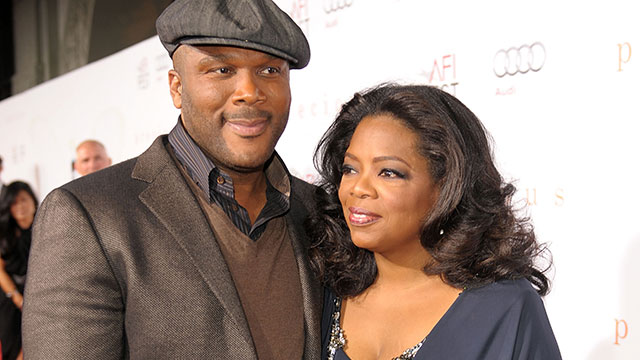 Oprah and Tyler Perry are officially in business.  Perry will have the honor and the pressure of creating the first scripted shows for Oprah’s OWN network.  Monday he announced that he signed a deal with Oprah to executive produce, write and direct two scripted series for the channel.

Oprah was singing the praises of Tyler, similar to the way she hailed Rosie before Rosie’s show crashed and burned on OWN,

“I have been looking forward to the day when we would be in the position to enter the world of scripted television. That day has come.  We are all energized by the opportunity to collaborate with Tyler who has a proven track record for producing highly successful cable series. He has an incredible ability to illuminate life stories and characters in his unique voice and inspires and encourages people all over the world.”

I’m not sure if I would call either “House of Payne” or “Meet the Browns” quality, or highly successful, but they were at least on cable.

Perry was equally as complimentary to Oprah,

“It’s a dream realized to partner with Oprah and bring scripted programming to OWN.  She has accomplished so much with the network and I’m excited to work with her to be a part of its continued growth.”

Perry is a smart man.  Do you remember when he gave Oprah and Gayle matching Bentley’s? He knew what he was doing…even back then.

“I called Tyler and told him how amazing that was because nobody ever does anything like that for her, on such a grand scale,” King said. “And so, the next day when I got home, there was a Bentley in my driveway!”

After someone gives you and your bestie matching Bentley’s, how can you say no to a show or two on your own network?  Well played Mr. Perry…..Well played indeed.

OH – in case you were wondering, two Bentley’s is chump change.  Tyler Perry has a net worth of $400 Million.