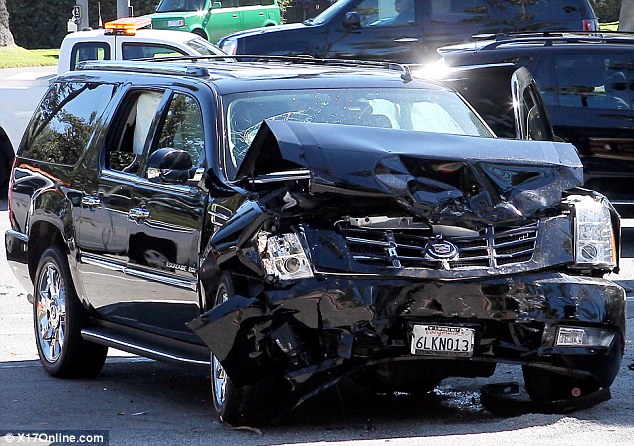 Pictures from Diddy’s Dramatic Car Crash; Looks Worse than It Really Was

After reports that the 42 year old mogul was in a car crash, pictures began to pour in.  You can see the front of Diddy’s Cadillac Escalade is folded in like and accordion.  It looks very serious but reports say despite the extent of the damage, there were no serious injuries.

According to the authorities, Diddy’s vehicle was traveling West on Sunset Boulevard when a Lexus made a left turn in front of Comb’s Escalade.  The SUV could not stop in time and smashed into the car.  Imagine you are about to make a left turn, and for some reason you do not see an SUV coming down the street when you look to your right.  Thinking it’s all clear, you pull out.  Then – WHAM! That’s basically what happened. A chubby Andre Harrell, can be seen standing next to Combs in some of the pictures.  The most dramatic picture is Diddy sprawled out on the ground after the incident.  Diddy complained of pain in his neck and collarbone but refused to get into an ambulance, instead opting to seek medical attention on his own.  The driver of the Lexus received unspecified injuries and was taken to a hospital.
[more…]