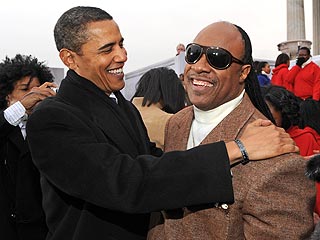 Just two weeks before the election and Barack is pulling out all the stops, or at least his campaign is.  Stevie Wonder has hit the studio in efforts to sway some voters Obama’s way.  He released a song called “Keep Moving Forward”.

The video was posted to YouTube on Friday and starts off with a positive message,

“It’s your right. Get out and vote. Let’s ‘Keep Moving Forward’.”

Stevie and Obie go way back.  Wonder has been an outspoken Obama supporter for some time and has performed for a fundraiser and at the private dinner party thrown by Jeffrey Katzenberg, and last week he attended an Obama event in Los Angeles.

Obama is often quoted as saying that his and Michelle’s love for Stevie Wonder’s music was something that helped them find common ground early on in their relationship.

“I think it’s fair to say that had I not been a Stevie Wonder fan, Michelle might not have dated me. We might not have married. The fact that we agreed on Stevie was part of the essence of our courtship.”

My issue is that the song….with all due respect to the great Stevie Wonder….kinda sucks.  Maybe I need to hear it again, but it’s like something that would be made for Sesame Street.  That might be what it takes to reach the undecided voters – which if you are still undecided you might need some remedial assistance.  Stevie’s breath of work is almost unparalleled with more classics then non classics, but somehow this song just left me “Wondering”.