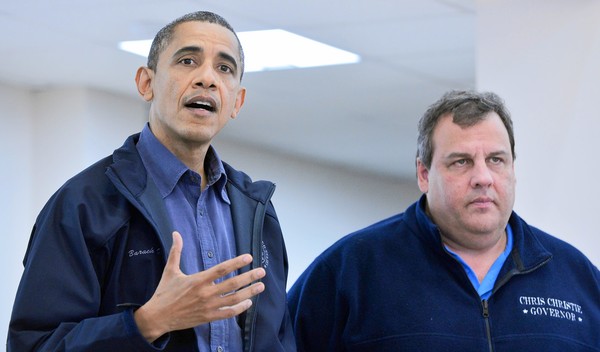 In one of the most remarkable stories of the campaign, Governor Chris Christie has done a complete about face and is now President Obama’s BFF.  Just 12 days ago, Christie was straight up BASHING Obama. He told the press in what we have known as a a typical Christie right winged Anit-Obama rant,

know how to lead. He’s like a man who is wandering around a dark room hand up against the wall clutching for the light switch of leadership, and he just can’t find it and he won’t find it in the next eighteen days.’

Well guess who found the light switch?  Fast forward to the day after Hurricane Sandy, a helicopter tour of New Jersey and a declaration of disaster and Christie and Romney are BFF’s.  Christie, being the shrewd, crafty, intelligent, aggressive guy he is, sees that there is a lot to gain from his alliance with Obama and absolutely nothing to gain with any alliance with Romney.  Obama sees this as an opportunity to capitalize on a gift from the Heavens so basically Christie’s wish is his command.  This Hurricane might be able to undo the damage that occurred during the great Obama meltdown during the first debate. After the visit, when Christie was asked if he would tour New Jersey with Romney, aka the guy who can’t do crap for you, his response took the Fox Team by surprise,

“I have no idea, nor am I the least bit concerned or interested…If you think right now I give a damn about presidential politics, then you don’t know me.”

Watch the newscast as Christie lays into them like only he knows how.  If Obama wins, he will have to owe this victory to God, Mother Nature and Christie.

And now I bring you…. “Hurricane Christie touches down on Fox News”