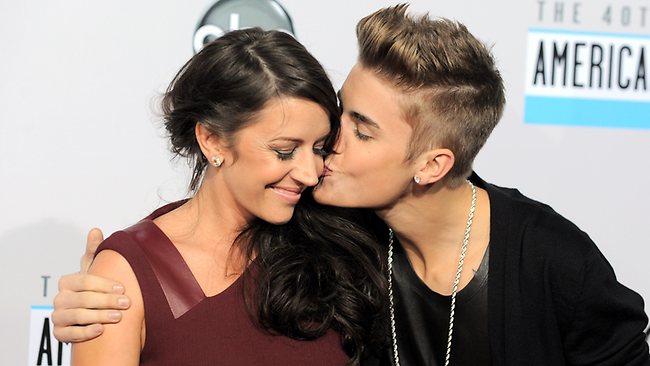 Imagine if your mom put out a book?  Imagine if not only you had to read about your mom taking drugs, getting sexually abused and attempting suicide, but the rest of the world was reading this as well.

That is exactly what The Bieb is going through right now.  Justin Bieber’s mom, Pattie Mallette has decided to write her memoirs in a book entitled “Nowhere but Up”

Pattie Mallette was a teenage mom, only 17 when she was pregnant with Justin.  In her book she gives shocking details of being sexually abused when she was only 3 years old, her own father, an alcoholic left her and her mom at age 2, and how she abused drugs, smoking pot and LSD in her teens.

If that’s not enough, at 17 she was hospitalized in a mental institution[more…] for trying to kill herself by jumping in front of  a truck. Bieber said it was hard hearing about his mom’s struggles but he support her 100%.  Bieb says,

Yeah, it was a lot for me to hear. But I’m older now. When I was younger, my mum never told me any of this stuff.

‘It was definitely hard reading those stories, but I’m supportive of her writing the book. It’s cool.’

The book isn’t all tragedy.  Mallette’s life seemed to chang when Justin entered and then there is that fateful day when she put Justin’s video on youtube.  She retold the details back in 2011 to Vanity Fair,

”I put up a little video on YouTube for Grandma and some relatives to see, and the next thing we knew, all these strangers were clicking onto it, probably because they recognized the song.  It was ‘Oh look, honey, you have a hundred views,’ Then ‘Oh wow, a thousand views.’… Next thing we knew, thousands and thousands of views. But it never once occurred to me that there would be a music career out of this.”

Despite pressures to abort her baby when she was pregnant, and in a shaky relationship with Justin’s father, Jeremy Jack  Bieber, Mallete says that she just couldn’t.

The rest is history.

Pattie Mallettes book: Nowhere but Up: The Story of Justin Bieber’s Mom, is on sale at Amazon.

Justin Biebers Net Worth is: $110 Million