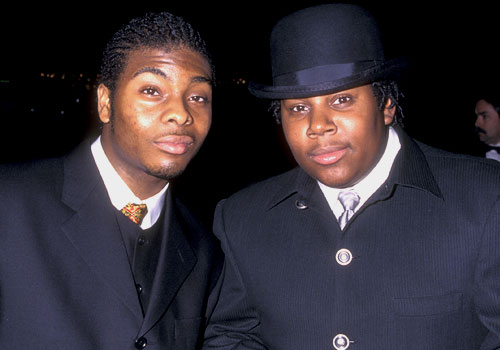 The loveable teenage comedic duo from Nickelodeon are no longer teenagers and no longer lovable.  Kenan Thompson and Kel Mitchell who joked their way as Keenan and Kel from 1996 to 2000, producing 65 episodes and a Good Burger movie, are now no longer speaking.

Actually Kel is not talking to Kenan.  During an interview with TMZ Kel said, regarding his relationship with Keenan,

‘The truth is Kenan does not want to be seen with me in any form of media, or even have my name mentioned around him.’

Kel says that he isn’t mad.  He understands and respects Kenan’s decision to continue to prove that he is a solo comedian, despite their show ending[more…] nearly 12 years ago.

With his buddy somewhat blowing up, Kel did a good job of not sounding bitter during the TMZ questioning.  He is playing it smart.  He will probably wait for Kenan’s NBC pilot to get cast with the hopes for a role, before he decides to throw his boy under the bus and burn a bridge or two.  Well Played!

Kel himself has been keeping busy.  Despite his embarrassing role in Like Mike2:Streetball, he has been doing a lot of animation voice overs and bit parts in films and TV.

Kel looks mad smooth, if he gets his agent together he should be able to blow up on his own as well.  I personally thought he was the funnier out of the two anyway.

When Kel heard that Kenan was getting an NBC pilot, he was like,