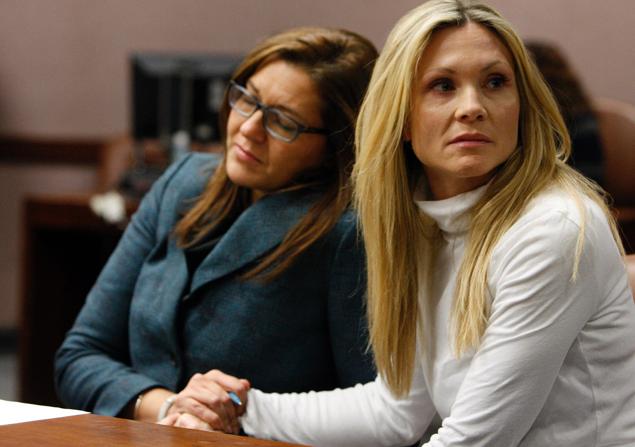 Former Melrose Place actress Amy Locane-Bovenizer has been convicted of vehicular homicide as a car that she was driving killed 60 year old Helene Seeman and left her husband severely injured.  Her blood alcohol level at the time of the accident was three times the legal limit.

Locane-Bovenizer was convicted by a jury.  What might have done her in was testimony by police that said that she seemed to be happy and giggling when they approached her car that was sitting in a drainage ditch.

Reportedly she had no idea what was going on.  As she was being placed on a stretcher and a neck brace was placed on her to stabilize her, she was clueless.  She wondered why the cops were making such a big deal.  Police officer Wilkes who was on the scene said they told the actress,

“The reason I’m making such a big deal is because you were just in a severe two-car collision.”‘

After taking her blood sample to determine the alcohol content she continued to joke asking,

Am I drunk or pregnant.

Locane-Bovenizer’s defense lawyer says that she was being chased by another car that she rear ended earlier, which caused her to drive wreck less, eventually plowing into the car of Mrs. Seeman and her husband Fred.  Fred Seeman suffered from lung and rib injuries and testified that he had to watch his wife die as he heard gurgling noises coming from her body.

The Seemans returning from dinner were turning into a driveway when Locane-Bovenizer struck them.

Locane-Bovenizer admitted she had eight to ten drinks at two gatherings before the accident.

Her bail has been revoked and she has been locked up waiting for sentencing.  The 40-year-old mother of two will face sentencing on March 1st.

I say throw away the key.  Yes we all make mistakes but life is not a video game.  The Seeman’s don’t get a do over.  Remember, Alcohol, taken in sufficient quantities, may produce all the effects of drunkenness.  True Story.