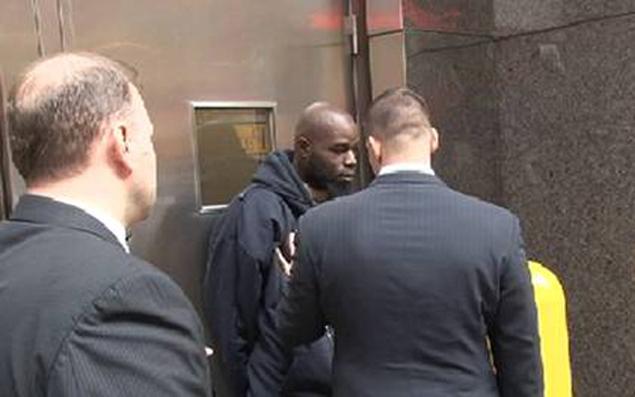 The Subway Pusher Has Been Caught. Naeem Davis says, ” He wouldn’t stay away, and I pushed him”

The Subway Pusher has been caught.  The man responsible for the horrific act of pushing another passenger on the subway tracks in front of an oncoming train has been caught.

Right now he is only a suspect but police believes that 30 year old Naeem Davis is responsible for the death of Ki Suk Han.  Han was struck by the oncoming Q train as he tried desperately to climb back on the platform.  After the incident happened Naeem was able to flee the scene and head right into Time Square foot traffic.  At that point you are long gone.

After the incident Naeem shaved off his dreadlocks but a transit police captain still recognized him while on a coffee break.  The Captain ran over and grabbed him.  Authorities say that Davis confessed to shoving the man on the tracks. He is expected to be charged today after standing in an actual police lineup.

Naee himself has 8 prior arrests in New York and also has committed crimes in Pennsylvania.  The describe him as a drifter who gets paid to help street vendors by running errands.

The NY Post is still taking a publicity beating after running the front page photo of the incident.  The photographer who took the photo was actually a freelance photographer by the name of R. Umar Abbasi.  He just so happens to work for the Post and was in the right place at the right time…for a photo.  When the questions were asked how come he had time to take photos instead of helping, Abbasi insists that he was actually running forward firing his flash to warn the train operator to stop.  Abbasi says,

“I just started running, running, hoping that the driver could see my flash,”

The train slowed but not in enough time.  When the train stopped, the man was caught in between the platform and the train.  Abbasi described Ki Suk Han as crushed like a rag doll. Despite the public outcry against the photo, Abbasi did what he was trained to do.  Get the photo!

Witnesses say that Ki Suk Han was actually the aggressor, as he and the alleged pusher Davis argued. Davis says the two started to argue when they bumped into each other before going through the turnstiles and continued on the platform. Davis said to police that he tried to avoid the confrontation,

“I begged him to leave me alone, and he wouldn’t,  He wouldn’t stay away, and I pushed him.”

It will be interesting to see how Naeem Davis will be charged.