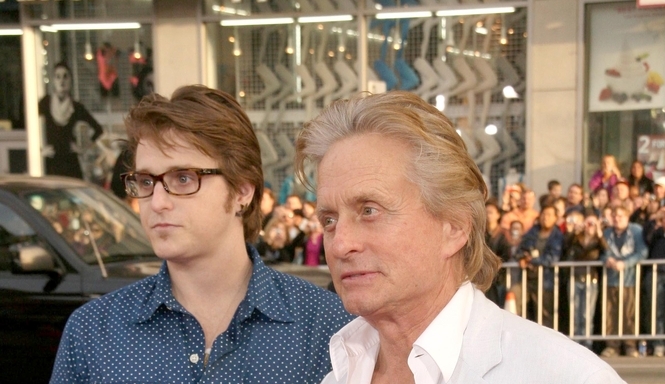 Michael Douglas’ Son Beaten Badly in Prison….for Being a Snitch!

It appears that prison movies are not that far off from real life. Michael Douglas’ son, who is serving hard time in Jail for his drug use has had a bounty put out on him in prison and apparently someone collected it.

The 34 year old Cameron Douglas was labeled a “rat” when it was released during a bond hearing that he gave up his supplier for a reduced sentence. His shrink, Dr. Robert Millman let it slip that Cameron was revealing the source of his drugs to shave 5 years off his time. The younger Douglas squealed on two Mexican immigrant brothers David and Eduardo Escalera and was able to decrease his time almost in half.

Cameron Douglas however will still be doing close to 10 years now as he got caught trying to smuggle drugs into the Metropolitan Correctional Center in New York, which earned him a 4.5 year bonus.

NO LONGER A BABY FACE

Prison has transformed Cameron Douglas. He came in as a baby face, but he has been working out and he now has prison tats. A source revealed,

“He recently had his initials inscribed on his neck and big stars on his shoulders, with each year of his incarceration in each star: ’10, ’11, ’12. And he’s currently getting a scroll on his back. They are being done by his best prison pal, Billy Trent, and he’s paid over $1,000 so far for all the ink.”

All of that still couldn’t save him.

Once the word got out that he was a rat, a New York mobster who is referred to as “King of the Italians” put a bounty on Cameron’s head for $100 dollars. Now being held in a Lorett, Pa, facility, and part of a flag football team, the word was that anyone that seriously injured Cameron during the season would receive the money.

Once Cameron found out that he was a target, he pulled out of the league but not soon enough. A source told the NY Post,

No one has been punished for the incident and obviously Cameron is done snitching so the likely hood that someone will is slim.

Cameron will not be eligible for release until 2018. That seems like such a long time away. The moral of this story….drugs are bad and prison is real!! If Cameron survives a screenplay should be his next step. I would watch it.