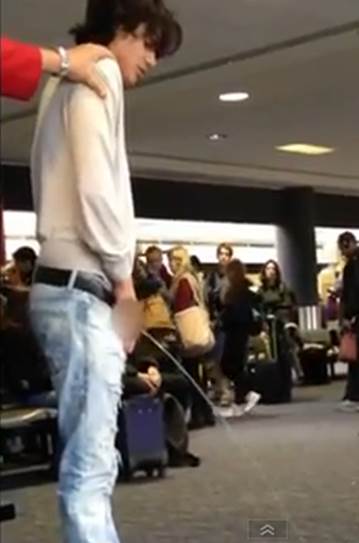 WATCH – Twilight Star Bronson Pelletier, Drunk in LAX, whip it Out and Urinate Right there in the Terminal [Video]

Wow!  That’s all I can say after seeing this clip.

This is one of the clearest videos and it’s clearly Bronson Pelletier, the guy who played the role of Jared in the “Twilight” movies.  In previous weeks, he has denied that this incident occurred but now this is video proof.

The same week that this incident occurred, Pelletier was at the Gym Bar in West Hollywood where he had too many drinks and was making bar patrons feel uncomfortable with his behavior.  Authorities were called in and he was arrested for public intoxication. When he was searched during his arrest police found meth and coke on him.

NOW TO THE AIRPORT……

The video takes place, after the Twilight star is thrown off his earlier flight for causing a disturbance.  Before the flight took off, the flight crew considered him dangerous and too intoxicated to fly.  Bronson was removed from that flight and put on a later one so he can sober up.

The video starts where he is being detained and he clearly has to go to the bathroom.  He’s doing the potty dance.  In court I’m sure he can argue that he was being detained because that is clear.  Just how forcibly will be the argument?  After the person nudges him to sit down a few times, Bronson unzips and pees right there in the terminal. This is no little squirt – dude is full on taking a whizz for about 40 seconds.  The police come and thrown him on the ground and cuff him. The crazy part is that they do it mid-stream.  He’s still peeing when they grab him.

This is going to be a busy year for Pelletier but unfortunately it will be making court dates instead of movies.

Here is the SHOCKING VIDEO CLIP!